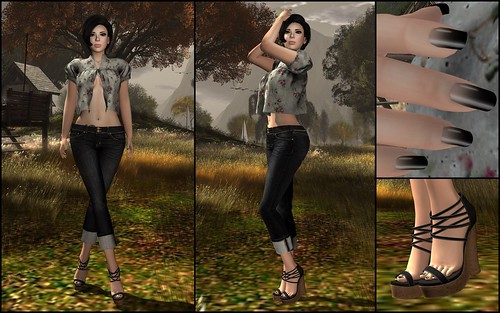 I’ve been going through an 80’s movie phase, and I will admit, though hokey they sometimes are, they are pure entertainment! I’m sure everyone in my age bracket has favourites that takes them back in time! After this much time has passed it’s hard to think of my own life as anything other than an 80’s movie! I had big hair, I wore shirts with one shoulder down, and high waisted jeans were the best! One of movies from the 80’s that I hadn’t seen until last year though is Roadhouse! I know all the bad stuff that was said about it, but for me, it’s great fun. With Patrick Swayze gone, it’s great to look back to when he was so alive and at the top of his game physically. Also, Jeff Healey is gone and this movie has captured him when he was just beginning a very successful music career. He wasn’t the best actor, but boy he could play the guitar. His version of “When the Night Comes Falling From the Sky” is pure genius! On the bright side, we still have Sam Elliott…he has been one of my favourites for a long time and he just oozes masculinity! And like in any movie I watch, even if the story isn’t great or the acting is mediocre, it’s great to take a look at all the sites where the filming took place. It gives a short glimpse back in time to when the hair was big and sprayed into submission, the mullet was king and life seemed simpler!

Now that I’m all melancholy I’ll get on with how great this outfit is! I LOVE this top!! It’s the Tie Sweater from {MYNX} and it comes in six textures and five sizes! This is the grey floral and it’s perfect for the early fall days we’re having here in my corner of the world!

The Lori Wedge from ::JK Style:: is available at Round 112 of Designer Circle! They’re SLink mid foot compatible and come in a pack of two, this is the black from the black/tan pack!

A new round of The Showroom is up and going and .Figure. is there with the Strict Nails set. It’s SLink and Omega compatible and comes with eight colour options!

The Niska, bare skin in Satin tone is from Lumae and from now until September 12 it’s at the Lazy Sunday price of 75L$ per tone!

The Harlow’s Cuffed Jeans in black are from {mon tissu} and no longer available.

Hands and feet by SLink.

I took these pictures at Just Another Tequila Sunrise!