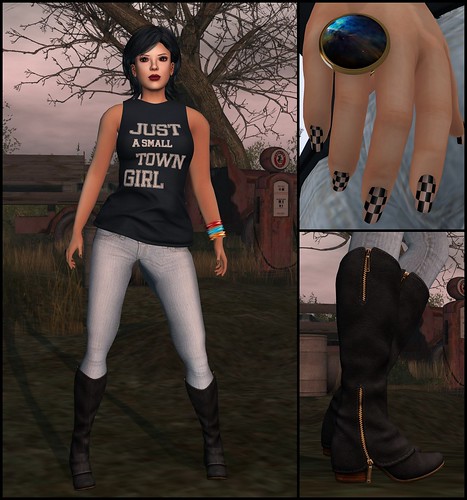 from the song Don’t Stop Believin’ by Journey

Actually, I’m a farm girl…not a small town girl! I don’t consider myself living in a lonely world either. I’ve never been on a train going anywhere or otherwise! But, I LOVE that song! I loved it when it was new and then again when I saw it in the movie “Rock of Ages”! I lived through the eighties as a late teen early twentysomething and I didn’t remember it being as fun as it looked in the movie. I think I enjoy the eighties more now as I look back at them, than I did while living them!

I love the Opened Tanks from {MYNX}. It comes in eight different sayings so you can show your mood of the day! It doesn’t show here, but it’s very loose fitting around the arms to reveal some side boob gimpses! 🙂 The tanks come in five sizes and are also compatible with the Maitreya mesh body and the Freya, Isis, and Venus mesh bodies from Belleza.

.Figure. has a few new nail applier sets out and they’re available at the current round of The Showroom. I’m showing one of the eight options from the Mattes nail set. They are compatible with SLink and Omega.

I’m wearing the Jewel, Plum Delight skin in peach tone from Lumae. The Jewel,Plum Delight series is on sale until November 7. While there check out the clearance sale that has huge price reductions on all skins!

The O.D Bangles in Rainbow and the Faith Ring, Cumulus are both from Bokeh.. The bangles include stacked sets or singles and are colour change via menu on touch. They are also non-rigged mesh and include a high LoD version in the pack.

I’ll never tire of the Cavalry Boots in black from !APHORISM!.

The Layla 84 jeans in Light Wash are from DECOY.

Pictures taken at the Hazardous sim.