Take Me Away to Another World 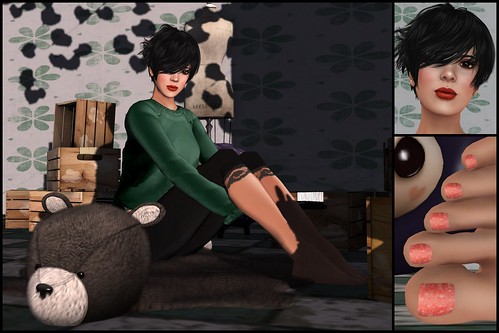 I haven’t watched a soap opera in years and years, but when I did it was always Another World! I was there faithfully to check in on Jake, Donna, Carl, Rachel and all the others to see what they were up to! I watched all through the 80’s and early 90’s but I remember as far back as the early 70’s Mum watching it while ironing clothes! It seemed that show was on forever and I thought it would be until I heard it was cancelled! I, unfortunately, never got to see the last episode, I was on the road at that time and it quietly slid into oblivion without me! But I miss it still…..the happy times, the sad times, and the times like when Donna slept with Jake, even though Jake had been with Vicki, who was Donna’s daughter, and had also been married to Marley, Vicki’s twin sister! Do those things happen in real life??

Collabor88 might be quietening down a bit from it’s opening day on the 8th so you just might be able to get in and grab up one, or all, of the Abbi Pullover by Stories & Co. by Flowey! It has fifteen colours to choose from and it’s sure to keep you snuggly on the cool fall days! Or as it is in western Canada….the cold early winter days!

Lumae has a new sale item out until November 21st! Drop in and you can get Niska, Pumpkin for 75L$ per tone! While you’re there take a look around at all the deals for the clearance sale! All skins are 50% off or 100L$!

There’s a new release out for Hello Dave and it’s SO pretty! The Frosty Berry pack comes in either glossy or matte and has 35 wonderful colours to pick from. This weeks VIP gift is out too and it’s a six pack of Frosty Berry, free for group members! The appliers are SLink and Omega compatible.

The Lace Trim Leggings are from Veechi! There’s ten colours in the pack, I’m wearing the system tattoo layer but there’s appliers for SLink, Maitreya and Omega in the pack also!

The Boys and Girls 58 hair is from Dura.

I found some lovely sit poses at Sari-Sari! This is from the Relax Sits pack.

I’m sitting at home and I have around me the Cloudy Crates from Bokeh, they’re available right now at Sad November. There are three colours to choose from and they really look great as a bit of clutter on the living room floor! 🙂 I’m sitting on the Brown Bear Rug from Boogers and it’s from a previous round of the Arcade Gacha Event.