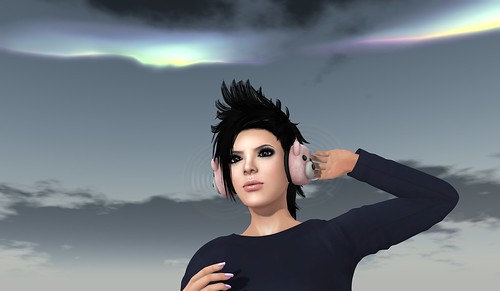 There is just something about a good song that can completely change the way I look at life! At any given moment a song can create a new thought process and transport me into another, always better, place! I have no favourite genre of music, I can find something positive in most styles. I used to say that of all music there’s just two styles I don’t like, rap and jazz. I’ve changed my mind about jazz….either my taste in music has changed a bit or I’m more open minded…but rap I don’t think I’ll ever get to like. But whether it’s Bob Dylan, Leonard Cohen, Jeff Healey, Stompin’ Tom Connors, Bach, Lenny Kravitz, The Dixie Chicks, George Thorogood, AC/DC, Pearl Jam or The Four Tenors…..it’s all pure magic!

The subject of music came about because of the completely incredible Beary Cute Headphones from Anachron and available at the current round of SaNaRaE! They’re kind of a cross between headphones and ear muffs, so you get toasty ears and a head full of music at the same time! The fun thing about them is the little HUD that operates a cute little head bob that you can make faster or slower(or turn off) and a wonderful particle effect that either sends little translucent music notes or head banging bass like in my picture! They come in four styles and are half price for the duration of the event, which runs until January 22.

This post is only giving a glimpse of the Flare Dress from {MYNX}, but I’ll be showing you the rest in the next post!

The Delphine, bare skin from Lumae is seen again here! I added a little Shimmery and Smoke Eye shadow from KOSH to it.

Another thing you’ll be seeing more of next time is poses from the Painkiller sets from Le Poppycock at the new round of The Chapter Four. I am using one of the poses but I’ll give you a better view next time! 🙂

You can see a little bit of the Metallic Crush nails from Veechi! You’ll get a closer look in the very near future!

I love the BAMF hair from rezology!