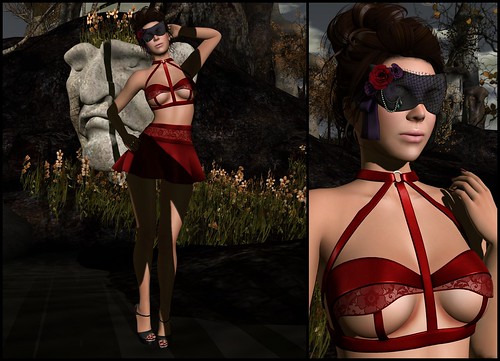 Comes the morning
When I can feel
That there’s nothing
Left to be concealed
Moving on,
a scene surreal
Know my heart will never
Never be far from here

from the song “No Ceiling” by Eddie Vedder

I’ve been enthralled with the soundtrack from the movie, Into the Wild”! The whole album is completely haunting and the voice of Eddie Vedder never so good! I highly recommend the movie, and the book that inspired it written by Jon Krakauer.

I was really at a loss of what to do with this outfit! I love it…I really do…but I took over 30 pictures with different windlights, different places and a whole range of poses. So after taking some time away, I came back to the computer and took these two pictures and was satisfied that this is how I wanted it to look!

Two of my newest featured designers are participating in the current round of ROMP, which runs until January 22. ROMP is described as “elegant kink”, and who doesn’t love that? 🙂

This is my first post featuring DECOY and I’m so thankful for getting the opportunity to share all the incredible creations! DECOY has released the Rosy Peek top and skirt at ROMP and they don’t disappoint! The top and skirt are sold separately in four colours to mix and match and are Maitreya, SLink Hourglass and SLink Physique compatible. I will admit to having purchased a mesh body quite awhile back, but it scared the crap out of me! But when I saw that I needed a mesh body for these I just dove right! After some time working with it I did manage to make it work, but it’s going to be a learning process for me. I’ve never had so many HUDs attached at one time!

Also at ROMP is Anachron with the Dark Masquerade Masks! They come in six styles with either closed or open eyes! This is the Black Widow mask and it adds so much mystery, and being mysterious IS sexy!

I opted for a sexy updo from Argrace for this outfit! AZAMI comes with two options, this is dark brown from the dark browns pack!

The Drew Heels are from HILLY HAALAN and available at the current round of Cosmopolitan! I’ll show a closer look at them in the near future!

I had to get a first hand look at Roots by Cica Ghost! So I took a few minutes to explore before settling into picture taking. So beautiful 🙂