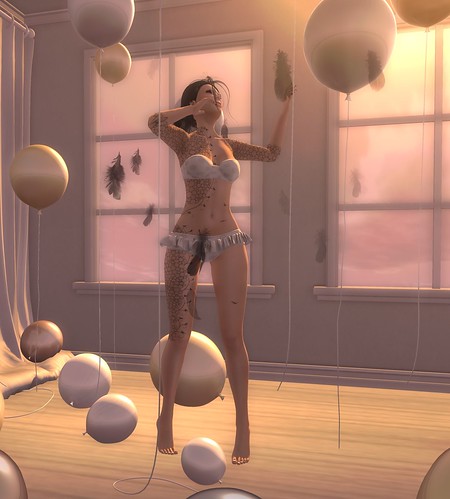 We’re mere pixels in our Second Life….as we are only flesh and bone in our human form! But behind every pixel is a soul that lives, a beauty that can never be erased, and a power that won’t be defeated!

I’ll admit to having never worn a particle generator before, but I was completely taken with the Angel Feathers from Anachron! It’s HUD driven with eight colours(plus tintable), four options for the amount of particles(from just a few to a blizzard), turn the glow on/off, and you can add a little bit of a breeze! This, and the Petal Generator, are available at the current round of SaNaRaE until March 18.

I’m using the Room of Balloons pose prop from Exposeur Props & Poses! The room is all modifiable and comes loaded with poses. Everything at Exposeur is on sale right now, so it’s a great time to get all the props you’ve been wanting!

I’m wearing the Manon Set(bra & panties), which is the Anniversary gift from Dead Dollz at the current round of Shiny Shabby! It’s been super busy, but it’s worth the fight to get in with all the free gifts available for Shiny Shabby’s first anniversary!

I’m wearing the Hope skin in Milk tone from .::WoW Skins::. which is available at the current round of the Kinky Monthly Event!

The tattoo is Birdy from [White Widow] using the applier for the Maitreya Lara mesh body!

The casual hands and high feet are from SLink.