Can You Speak Bocce? 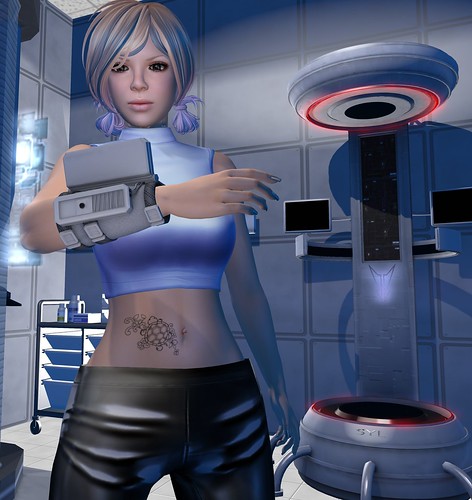 “What I really need is a droid that understands the binary language of moisture vaporators.”
“Vaporators? Sir, my first job was programming binary loadlifters—very similar to your vaporators in most respects.”
“Can you speak Bocce”
“Of course I can. It’s like a second language to me..”
―Owen Lars and C-3PO

Who doesn’t love good a Star Wars quote? I made a visit to Wookieepedia for some clarification on the use of vaporators and loadlifters!

I mention Star Wars because from March 1-15, Multiverse the first ever annual sci-fi related event, is on and Anachron has released the Data Bracer Wrist Mounted Server for the occasion! It comes with men’s and women’s sizing and there’s six designs to choose from! It’s HUD driven with all kinds options, including animation! Now, back to my parents basement to role play a little more! 🙂

The Chromatic Crop Top in Galactic is a stylish little number from DECOY! It’s SLink and Maitreya compatible!

The High Shine Leggings are from Stories&Co. by Flowey, these are the Metallic Black !

A visit to the new round of the Arcade Gacha Event got me the Myu hair with the Color Fades HUD from Tableau Vivant!

The Hope skin in Milk tone is from .::WoW Skins::. and available at the current round of the Kinky Monthly Event!

I’m using one of the many men’s poses that Le Poppycock does so perfectly! My arm is in the perfect position to read my wrist server, by adding it to my arm!

I ended up in the medical unit on the futuristic sim, Temporia Prime! It’s the perfect sim for all things sci-fi with the role play currently being set up!