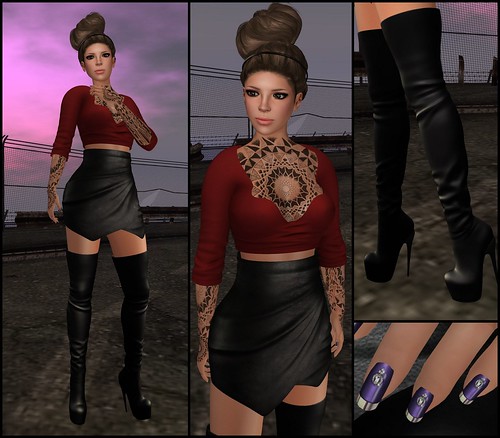 Ha, I love The Guess Who! A great band from Winnipeg, headed by Burton Cummings, that was pretty big back in the 70’s! At least they were up here, where winter is ll months a year……and summer is one month of bad skidooing weather! That’s not really quite true, actually. 🙂

The 100 Block Fashion Fair is on now and even.flow is making a spectacle of itself there, in a good way of course! With three new releases for the event, it’s shaping up to be a good time! The Cropped Tops, the Thigh High Boots and the Wrapped Skirts all combine to make a super sexy outfit! They all come in a large range of colours(and sizes) so you can customize at will!

Also at The 100 Block is Pimp My Sh!t! I’ll never tire of tattoos from PMS! The Circles Tattoo is one of the three new releases for the event, and all three are so finely detailed I can’t believe it! The 100 Block is having a huge photo contest in conjunction with the event, so get shooting! There’s all kinds of great prizes for the winner! The 100 Block runs until April 30.

A new round of Cosmopolitan is on and -{ZOZ}- has some really nice stuff there! The Royal Polish is there, and with appliers for Omega, Maitreya, SLink and the -{ZOZ}- mesh nails, so just about everyone should be able to show these beauties off! There’s also matching lipstick for you to colour coordinate with your nails! They’re compatible with the classic avatar, and also Catwa and Lelutka mesh heads! This round of Cosmo runs until April 23.

The Relitha skin in Tan tone is the exclusive to Omega Republic from .::WoW Skins::.!

The Bun Intended hair is for Analog Dog and is available at the main store for The Gacha Guardians.  This is from the Light Browns pack.

Pictures taken at After the Fall!