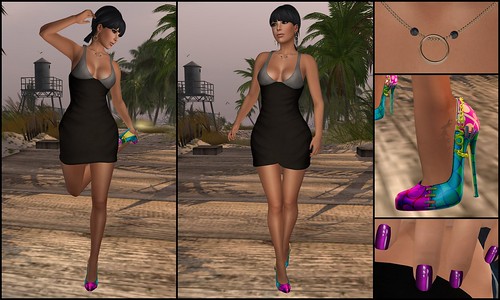 I’m Canadian, so it only stands to reason that I’ll be following the NHL playoffs, also known as the second season. The regular season is long and drawn out, and I don’t really watch it regularly, except for the Winnipeg Jets games, but once the playoffs start I’m usually found in front of the TV with a game in the evenings. Everybody probably sees me sitting there on the edge of a couch with a beer in one hand and a big foam hand with the #1 finger on the other. But, no, I just sit quietly watching the game, with only muttered murmurs of, “Are you kidding me!”, “You’ve got to be kidding” and of course the ever popular, “Are you blind, Ref?” I’m pretty quiet until a fight…then I’m up and cheering! So, tonight it’s Washington vs Philadelphia, and since one of Capitals players is from my neck of the woods, you know who I’ll be cheering for!

That has nothing whatsoever to do with Second Life fashion, but, I’m getting to that right now! I’ll start with the Jazz Dress from NoName! It’s a little dress that could work well for pretty much any occasion! It’s HUD driven with six colours and two areas of customization so you can make it your own! It comes in five sizes, but I’m wearing it over the Maitreya Lara mesh body with ease!

The Eternal Circle Jewelry Set is a new release from Slipper Originals and it has a nice simple style that can be dressed up or down! The set is colour change via menu with three metals and ten gem colours!

The Passion! Polish nails are from -{ZOZ}-. They come in HUDs compatible with SLink, Maitreya, Belleza, Omega, and the -{ZOZ}- mesh nails, with the pack containing nine vibrant colours!

The Love Patchworks shoes are from The Happy Hat, and the super bright and colourful shoes(for the SLink high feet), are definitely attention getters!

The Dark Side Fair runs until April 30 and Verocity has the Georgina pose set exclusive to it! The set has six nice natural poses(with mirrors) all unique and original!

The current round of Designer Circle has the lovely Irina skin from .::WoW Skins::. at it! Irina comes in six tones for classic avatars and Omega compatible mesh bodies!

The Hilary hair, from the Ravens pack, is from [elikatira].

I took these pictures at the lovely Summerwind South sim!