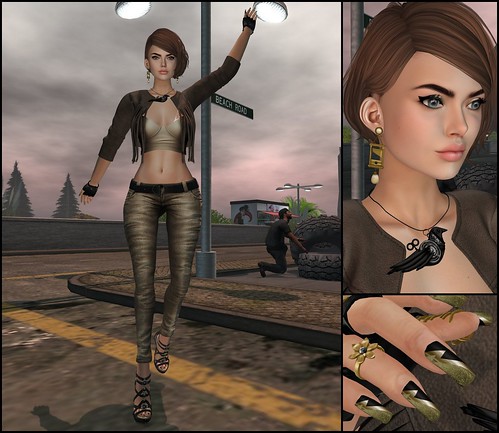 “Better to remain silent and be thought a fool than speak and remove all doubt.”

I’ve always loved this saying, it’s a truth that more people should practice! I wanted to add who said it, but after a little bit of searching I found nothing definite! It could have been Abraham Lincoln, Mark Twain, Confucius, or my Mum! It was Mum who I first heard it from and I’m still not sure if she was trying to tell me something with that quote!

So, after few words of wisdom, I’ll move along to the outfit! I’ll start with the Follow Me Outfit from Entice and available at the current round of Designer Showcase! The jacket top combo and the pants are sold separately and both come in six colours and five standard sizes, along with fitted versions for Maitreya Lara(seen here), SLink(Hourglass & Physique), and Belleza(Venus, Isis, & Freya) mesh bodies! I love being all curvy and smexy!

A new round of Genre is going and Anachron has a pair of earrings a little on the dark side! The Guillotine Earrings come in a pack containing gold and silver versions and they’re available in five different gem tones! I’m wearing the pearl here! Head to flickr(click on the picture on the blog post) and take a nice close look!

The Vintage Fair runs until June 26 and there’s lots to see there! Veechi has the new She Chic Shadow! I’m wearing one of the nine options that comes in the tattoo layer for the classic avatars, and also is available in applier HUDs for Genesis Labs(seen here), Lelutka, Catwa, and Logo mesh heads! I honestly never thought I’d turn to a mesh head, but make up looks so nice on them! I’ll eventually forget what I used to look like!

I’m using poses from the Becca Pose set from Verocity! The pack contains six poses and their mirrors! I think I’m hailing a cab here……I have no idea whats going on behind me but it looks like a drug deal that could turn bad!

The nail appliers I’m wearing here is from the Rock to the Edge set from Dark Passions-Koffin Nails, and available at the Rock Attitude Fair 3, but only until June 18! The pack contains twelve designs and is compatible with SLink, Omega, and Maitreya!

I love the Mechanical Crow Necklace from Bamse!

The Coraline Gloves are from RealEvil Industries! They’re HUD driven with lots of options!

The Reverie Wedges are from Eudora 3D!

The Olivia hair from the browns pack is from +elua+.

To complete the real me, I’m wearing the Nelly mesh head from Genesis Labs, the Maitreya Lara mesh body, and the SLink casual hands and high feet.

I’m on the corner of Beach Road and Main Street at Chatham Town and Forest. There’s two guys looking kind of sketchy there on the corner so maybe stay clear of there. Although they could be two guys working on tires…..but that’s not as exciting!

One thought on “Silence is Golden”