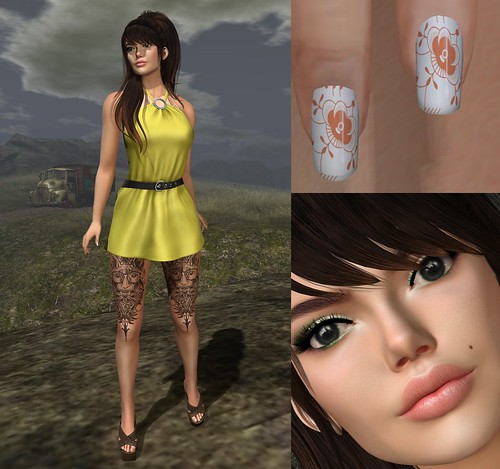 I’m really not sure where it went! Maybe it’s in the same place the lost socks go, in which forces a person to wear one white sock and one black sock when you only have two clean socks left! It could be where all the lost minds go!! I’ve lost mine a few times, but it always came back on it’s own without me having to go look for it!! I’ve witnessed some people ‘Lose IT!’…it isn’t pretty, but whatever they’ve lost seems to come back eventually! There’s much fuss of losing one’s virginity…maybe my lovin’ feeling is where everyone’s virginities are stored!! Anyway, I digress! So, I’m going to take a moment to raise a glass to everyone finding the one thing they’ve lost that made their world a better place!

And now….on to the outfit! I’ll begin with the Elle Dress from Pretty Things! It’s an exclusive to the current round of Designer Showcase and comes with a ton of colours options for the dress and belt via HUD! It’s compatible with classic avatars plus SLink, Belleza, TMP, and Maitreya mesh bodies!

The Scandinavia nail appliers are also an exclusive at Designer Showcase from DaneMarkZ. The applier has ten colours and are Omega and Maitreya compatible! I’m wearing them on my SLink casual hands!

The Feline Tattoo on my legs is a new release from Pimp My Sh!t and it’s a gooder!! It’s available at the current round of the Thrift Shop along with a bunch of other great new releases from PMS! It comes with three ink tones and is compatible with classic avatars, Omega compatible bodies and also the TMP mesh body!

I absolutely LOVE every new release from Veechi! This time around, I’m wearing one of the nine colour options from the Charade Shadows pack, which is available at the current round of Collabor88! It’s C88’s birthday round, so expect it being extra busy!. It’s compatible with the classic avatars plus the Catwa, Lelutka, Genesis Labs(seen here), and Logo mesh heads!

The hair is Lieke from the Exclusive Dip Dye pack from Mina Hair.

My shoes are the Revelry Heels in brown, from {Livalle}.

I’m wearing the Nelly mesh head from Genesis Labs, the Maitreya, Lara mesh body, and the casual hands and mid feet from SLink.

The lovely pose is from The Layna Series of poses from an lar [poses] and also available at the current round of Collabor88!

I love this area at the Honeycomb sim, home of hive!! It’s really pretty for lots of nice photographs!