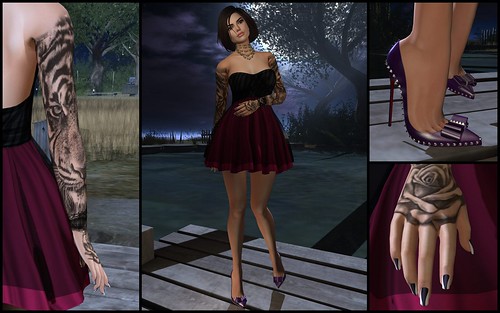 I love seeing all the different names in Second Life! I started SL in January of 2012, which unfortunately, was after SL stopped using last names! So, like all the others after that, I’m just ‘resident’! I always type ‘resident’ with a small ‘r’, because I don’t consider it part of my name. I’m TinLiz Winterstorm…..and proud of it! I know TinLiz is an odd name! I’d like to say it was a well thought out name that I had in my mind for a long time. But, that’s not the way it is! When first joining Second Life, when it asked for username, all the ones I had in mind were used, and I didn’t want a number in my name. So, after oodles of tries I finally managed to find a name that is kind of like what I initially wanted, and without a number. After this many years, I finally realized that ‘TinLiz’ is actually a combination of two nicknames I was called when I was a kid. And once I realized that, I started to really like this name. I do prefer ‘Liz” but TinLiz works too! Or even ‘Tin’…I don’t mind that either. Once I put on a last name I liked, I then became who I am in Second Life. Which is pretty much the real me. I don’t have the mental energy to be fake or some kind of pretend person. I’m just me! So you can call me Tin, or you can call me TinLiz, or you can call me Liz…..but please don’t call me ‘resident’!

I’m a little confused with the Fluffy and Fierce Event! Not by what it is….but in how to pick one or the other! So, I’ve picked one of each to show you! Firstly, I have on the Sydney Dress from [QE]! Sidney is fierce and also really pretty! It’s HUD driven with eight colours for the skirt layers and four colours for the top, plus it has three areas to customize. It comes in five standard sizes plus fitted versions for the Maitreya and SLink mesh bodies. While you’re at the F & F Event grab the hints at each booth, then head to the main store to find your free gift!

Also, at the Fluffy and Fierce Event is Pimp My Sh!t with two fluffy and two fierce tattoos exclusive for the event. I’m wearing the Fluffy Tiger tattoo, in medium ink tone, which is perfectly detailed and compatible with the classic avatars, plus Omega and TMP mesh bodies!

Take a gander at these absolutely stunning pumps!! The Krista Stilettos from NX-Nardcotix come in sixteen colours and are compatible with the SLink, Maitreya, and Belleza feet. They have beautiful detail, rich colours, and a unique style that stand out from the rest!

These nail appliers rock! There’s sixteen Pussycat Claws nail applier packs to choose from….and in each pack there’s one claw going to opposite direction, which goes on the thumb…a la kitty cat! Hello Dave always has something fun and exciting to paint your SLink or Omega compatible nails with!

The Miss CoCo hair, browns pack is from Vanity Hair and available at the current round of Hair O Logy.

The Mata Hari, high neck necklace from Maxi Gossamer Jewellery is a must have!

And as always I’m wearing the Nelly mesh head from Genesis Labs, the Lara mesh body from Maitreya , and the high feet and elegant hands from SLink.

The poses are from the Marilyn Series from an lar [poses].

I made a trip to Hazardous for these pictures.