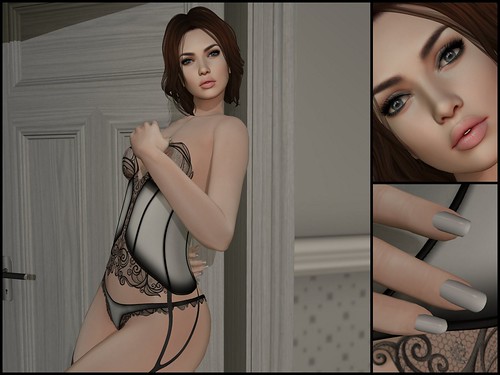 From what I see from the media there’s a whirlwind of emotions going on south of my border! I may be a Canadian, but with all of our media so closely linked to the U.S it’s been hard to ignore what’s been going on down there! Up here, everyone is asking how this changes things for us! Well, the sun came up and the sun went down, there’s still children being born and people dying! There’s still peace in the peaceful areas and war in the war torn areas around the world! Everyone will adapt to the thought of Donald Trump being president…….and whether for good or bad…..this will evolve! The one thing I do take a little solace in is that up here we elected a Prime Minister with great hair, while in the USA the President was elected despite having the worst hair known to modern man! Oh well, hair today and gone tomorrow!

A new round of Collabor88 started a few days ago and, as always, it’s an exciting one! NX_Nardcotix is a guest designer for the November round and the lovely Lucia Lingerie set is exclusive to the event! There’s seven colours available and the set includes corset, panties, and stockings! The cup and the garter can be turned off or on as desired! The Lucia Lingerie set is compatible with the Maitreya, SLink, and Belleza mesh bodies.

The Harvest Shadow set is a new release from Veechi and available at Sad November! I’m crushed to say that Veechi has discontinued the appliers for Genesis Labs mesh heads, but I’ve adopted the Alex head from Logo and am really pleased with it! The set contains nine colours and is compatible with the Catwa, Lelutka, and Logo mesh heads, plus the tattoo layer for classic avatars!

As I’ve mentioned, I’m wearing the Alex mesh head from Logo. I’m wearing the Irina skin in pale tone from itGirls for this look! I have kept my Genesis Labs eyes for the time being though…I do love the GL mesh eyes!

As always, I’m wearing the Lara mesh body from Maitreya and the casual hands from SLink.

When one is wearing lingerie this pretty the best place to be is at the door of the bedroom! I’m using the FemmeFatale photoprop from IMMERSIV which has six poses inviting that special someone into your boudoir!