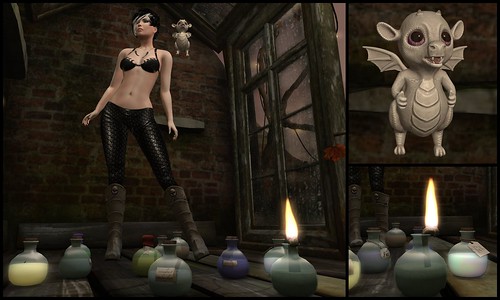 Anachron has released the Throwing Potions gacha for the Fantasy Gacha Carnival, which runs until December 7. This set is full of potions for different purposes and they can decorate your home, or you can throw them at whomever you wish! You must be in an area that allows rezzing, but after that just attach the potion of choice and bombs away!

The current round of The Gacha Garden is at the halfway point, so there’s still time to get some good gacha action in! lassitude & ennui has the Dragon Whelps gacha exclusive to the vent. The whelps can be companions or decor and the set contains eight commons and two rare(Albino,Rare seen here). And remember, after 20 plays on one machine you’ll receive the Seeds of Inspiration as a free gift, that will be retired after the close of The Gacha Garden! I’m wearing the Battleworn Boots in Bronze, also from lassitude & ennui, here!

The Dragon Scales Bra and Pants are from +Psycho Barbie+. The outfit also contains the Dragon Teeth necklace in four colours. The set is Omega mesh body compatible and classic avatar compatible.

I’ve dusted off the Sparrow hair from Hairoin, for this look! It’s an older hair and no longer available!

I’m wearing the Alex mesh head from Logo with the Irina skin in pale tone tome from itGirls. I also consist of the Lara mesh body from Maitreya and the casual hands from SLink.

Pose from Picture This, and no longer available!

I’m super excited about Deco(c)rate! It’s a monthly release from some of the best home and garden decor creators on the grid! I signed up for the November round and am really impressed with all of the items. I’m in the No Place of Ours Autumnal scene from 8f8! It’s a gorgeous little ruins with five singles and one couples pose included! I know I’ll be signing up for the next Deco(c)rate box of goodies, at 1500L$ each round it’s a great deal!