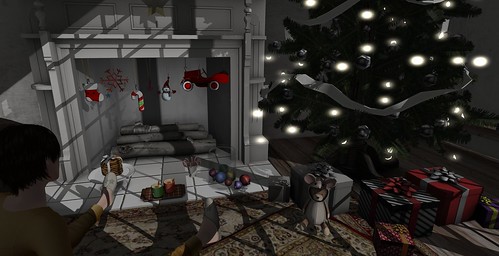 I’ve got my Christmas tree up earlier than usual in Second Life! I’m enjoying the tree, decorations, and gifts, even though the fire’s not lit! I know a fireplace is ‘the’ thing to have on cold winter nights, but I’ve not enjoyed a fire indoors in quite some time. I’ll tell you a little bit about how this came to be.

When I think of this story I can feel every moment of that day and night like it was yesterday, even though I was only a teenager then. It was December 22, my parents and I had a busy day preparing for Christmas, Mum had baked a couple of incredible Christmas fruit cakes but I was feeling like I was getting a cold. I sipped at a hot lemon drink that evening to try to get a good sleep and hopefully ward it off. We all watched some TV, then retired to bed at about 10 pm. In the dark of the night I slowly woke up, looked across my bedroom and couldn’t see the far wall for smoke. I bolted up, but realized I had no voice to yell to wake Mum and Dad. I croaked out ‘FIRE’ a few times and ran to their bedroom. We all stumbled downstairs to see the living room mostly engulfed in fire. There was no power to the house and with that came the issue of having no water, the fire extinguisher was too small to help, so we ran from the house….out into a blizzard. The phone wasn’t working, but back then there was no 911, anyway. I got the car out of the garage wearing nothing but my nightie, and Mum and Dad come running out into the night. We drove out of the yard onto roads barely passable with snow banks. We had neighbours nearby, but no one was home because of Christmas parties and such. It was 1 am….snowing hard and windy, and us wearing nearly nothing. We finally managed to find someone home, we pounded on their door til they woke up and the local volunteer fire department was called. Dad and the neighbour went back to see what they could do….but all they could manage was to save a few Christmas gifts. The fire department got lost and took almost an hour to arrive. By then, the house was gone and there was nothing left except a dairy barn full of cows that needed milking.

I weep as I write this, I don’t think about it often because of how it still affects me. We’re lucky to be alive…and as we drove down those snow clogged roads that night, we held hands and thanked God we were all still alive. I wanted to tell this story to remind people to please be safe during the Christmas season. Don’t leave a Christmas tree unattended with the lights on, burn candles safely, check your chimneys, and never take your loved ones for granted!

I’ll now carry on with regularly scheduled programming! I want you to take a look at the cute decorations on the fireplace! These are from a gacha set that’s out now at Tannenbaum and created by NX-Nardcotix! The Tinker Christmas set consists of six common and one rare decoration, the fire truck being the rare! They’re perfect to hang on the tree or elsewhere to make your Christmas merry!

Now, I think you should zoom in on the pretty slippers I have on! With the chilly floors during the winter slippers are a must have! These are the Peace on Earth Hunt 9 gift from Slipper Originals! The hunt starts today and runs for the entire month. With over 130 stops for the hunt you have to get an early start at it to get to them all! The slippers are Maitreya, SLink, Belleza, and classic avatar compatible!

I’m wearing the super warm Sleepy Long Johns and Top from the Wool Me Tender gacha set from Stories&Co. by Flowey!

One thought on “‘Tis the Season”