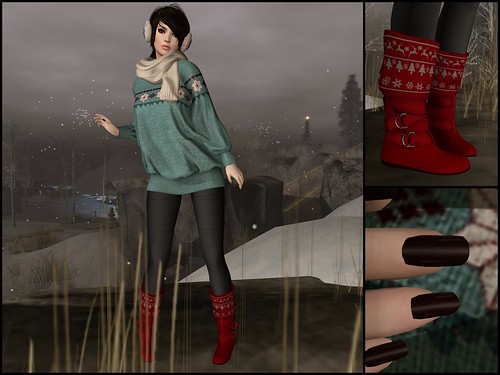 I remember hearing this phrase when I was a kid and not giving it much thought. It was just something that was said during the Christmas season! Well, there wasn’t peace back then, and there sure as heck isn’t peace now! I think peace for all is getting further and further away from becoming a reality as time passes. How can there be peace in the world when there’s no peace within? If each and every person stopped being a puppet and started to think, love, and live on their own volition maybe then there would be hope!

The month of December is right full of things that give me warm fuzzies……cozy houses with a cup of hot chocolate, decorating the Christmas tree, and doing the Christmas baking are just a few. But, the new pose sets from Le Poppycock are now one of the them! The Warm Fuzzies A & B sets are another great bunch of poses from Olivia Lalonde of Le Poppycock. The sets include six poses each and are unique, expressive, and natural, as always! They can be found, along with two couples poses, at the December round of The Chapter Four.

You can be all warm and fuzzie too, just taking part in the Peace on Earth Hunt 9 will do it! This is the longest running hunt on the grid and it never disappoints! This years consists of over 130 participating designers and there’s something for everyone. As promised, I’m showing a closer look at the POE boots from FLIPPANT! The hunt gifts are no cost, so anyone can get a pair of great boots! Also from POE9 is the Shades of Winter nails from Tashi. They’re Omega, SLink, Belleza, and Maitreya compatible and the set has eight colours, all perfect for the Christmas season. Click here for the landing point of the hunt to get started!

The December round of Designer Showcase has started and I’m wearing the Rustic Sweater & Earmuffs from :::KC::: Kendrasy Creations. The sweater is Maitreya, SLink and Belleza compatible and the earmuffs can be edited for easy fitting. They’re HUD driven with eight designs, with the sweater and earmuffs matching. This is so cozy!

To keep my neck warm I’ve added the Cozy Scarf in Fog from fashionably dead to the outfit!

One of my all time favourite hair is the Boys&Grils 42 from Dura.

The basics of my look are the Alex mesh head from Logo, the Lara mesh body from Maitreya and the casual hands from SLink.

I made a return trip to Pebbles in the Snow and did a little bit of exploring. It’s so beautiful there!