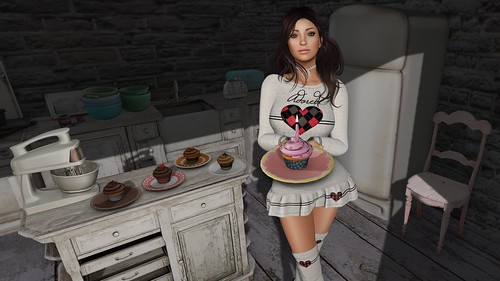 It’s inevitable that once someone starts baking and enjoys it, there’s no going back! I started early, but I honestly can’t remember the first time! I probably wanted to bake because there really is nothing better than home baked goodies! Mum is a sensational cook and baker, so I think it’s natural that I enjoy it, and I’m pretty good at it, if I do say so myself! I’ve had failures…oh yes…..the kind that isn’t even edible, not just the ones that taste incredible but look terrible! Those aren’t failures, really…just a different way of presenting it, but not really fit for a Queen! But, I don’t know any royalty, and I’m definitely not a princess! There really is nothing prettier than a pretty cupcake though, but to be a truly beautiful cupcake, the cake part must be as delicious as the rest of it! You can’t just take a dry old muffin, add icing, and call it a cupcake! The cake part has to be that tantalizing combination of moist yet fluffy and not too sweet, in opposition to the sweet icing! Really though, when the world gets you down, don’t drown your sorrows, suffocate them with cupcakes!

Today, I baked you a cupcake, well actually a whole batch of cupcakes, but this really pretty one is for you! Truth be told, Anachron has created the cupcakes, so I didn’t have to do the work! The January round of The Gacha Guardians is on for the month and it’s a gorgeous set! There’s ten commons and two rare to play for, plus every fifteen plays gives you one of the two special ‘Gift of the Guardian’, which won’t be available after the event! I’ve only seen a picture, but I know they won’t disappoint! The commons will give a cupcake to eat, on touch, and the rare can have their candle blown out, how cute is that?

The January round of Designer Showcase is on and it’s celebrating six years of great shopping! There’s lots of gifts and lots of great deals too! I’m wearing the Adored outfit from 1 Hundred, and it’s adorable! The main outfit is white, but there’s a choice of seven different colours on the hearts! The outfit includes the top, skirt, and socks with sky high pumps!

I think I’m really cute here, and it’s all because of the Everly skin in sand tone from Sinful Curves Skins! This is the Omega applier on the Alex mesh head from Logo! I’m also wearing the Cove from the Reflective Eyes set, which are also from ScS.

I’ve added a bit of eye shadow to the skin and I’ll be giving you a close up look in the next post so you can really see it’s beauty! The eye shadow is the Solsitce Shadow from Veechi and it’s available now at The Seasons Story!

My hair is from Magika, and it was in the May round of Luxe Box.

The Selene Ribbon Choker, in white, is from a gacha set from Violent Seduction!

I was looking for a nice kitchen and found the Small Spaces Kitchen from Dust Bunny, and I LOVE it! The set has six parts to it and it’s perfect for a little country kitchen! I’ve added the mixer from the Kitchen Essentials gacha set, also from Dust Bunny.

I’m using a pose from -slouch-poses, who is no longer in business, unfortunately, but I’ve added a pose from the A Helping Hands pose set from Le Poppycock! The pose is added to any other pose you want and it allows you to hold things in various positions. The set is going to prove invaluable to me!! It’s available at the current round of The Chapter Four.