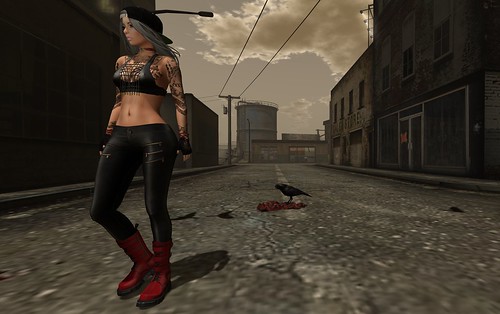 I understand how some may see this as a squeamish topic, but it is a fact of life! When a vehicle goes hurtling down a road, at how many miles an hour, when it comes in contact with a living thing, it’s not going to be pretty! I was atually kind of surprised to see this as I was strolling through a ‘not so good’ neighbourhood of After the Fall and found this roadkill! What crow can resist fresh roadkill?? And plus, is there an area in After the Fall that isn’t ‘not so good’? On this happy note, enjoy your weekend everyone! 😀

I know everyone has probably been to Shoetopia by now, but the ‘Hax’ Combat Boots by Livalle are worth making a trip back for! I saw them on Facebook a while back and knew that I had to have them. I was at Shoetopia nice and early to get my hands on the fatpack! The fatpack makes these so versatile that they’re the only combat boots any woman needs! Shoetopia runs until April 15, but time flies, so get a move on!

I’m wearing three items from RealEvil Industries today, the Jassy Corset Gloves, the Tina Top, and the Inked Collar. They’re all the high quality I’ve come to expect from RealEvil Ind., with lots of colours, metals, and areas to customize, and HUD driven, of course! The gloves were at The Whore Couture Fair which ended March 31, but they’ll be at the main store, before you know it! The Inked Collar and the Tina Top are both at the main store now!

Pimp My Sh!t has all kinds of tattoos, if you’re out shopping! There’s all kinds available, from dark and sinister to some with a more light and happy vibe! This is the ‘Caught’ tattoo, which is compatible with Omega and TMP mesh bodies, and also the classic avatars out there!

The Jessie hair hair/hat combination is from a previous round of The Arcade from Besom x Flite, and I’ve yet to find it available anywhere again! I love it!

The Leather Skinny Pants are from Maitreya, fitted for the Lara mesh body, naturally!

The pose is one of the fabulous men’s poses from Le Poppycock!

One thought on “Dead ‘Something’ in the Middle of the Road”