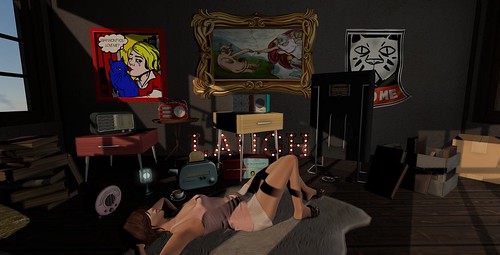 I have to admit that I’m from the radio generation! I had a little tiny battery powered transistor radio when I was a tween. Well, I wasn’t a tween back then, there wasn’t really a name for that age then. But, I had a little red transistor radio, with AM and FM, but I had no idea what FM meant! All I knew was there was nothing on it, and there was music on the AM side. So, it was all AM, all the time for me! It had a tinny little sound, and I had to stand a certain way to really get good reception. But, it was music and that’s all that mattered! I’d listen all day to hear the song I liked, and everything stopped when it finally came on. It was still a few years before the cassette tape appeared and I could tape my favourite songs to play when I wanted. I know this is really showing my age! 😀 But anyways, times have changed and I can hear any song I want at any given moment, and from anywhere I may be! There’s a soft spot in my heart though for all the mixed tapes I made over those years. Nothing said ‘I care’ like giving someone a custom made mixed tape!

I’m in my own radio heaven here! Remember the other day I was moving into my new reading nook? Well, I haven’t gotten any further with unpacking, but I found an awesome set of vintage radios that I just have to pay homage to! The complete Vintage Radios Gacha set is here, in all it’s glory, from KraftWork! And what a set it is! There’s eight commons and one rare to play for and they’re all lots of fun. Each of the six common radios come in two versions, one for decoration only, and another that’s a fully functioning radio! And no tinny sound with these! The RARE Big Radio is also fully functional and contains poses/animations for singles and couples! The Red and Yellow Tables are commons that are super retro and remind me of something The Jetson’s had! The gacha is 50L$ per play.

I’m really comfy laying here on the Faux Rug from Raindale! It’s a new release and available now at The Pose Fair 2017. It has six static poses, a land impact of 2, and comes with a tint HUD so you can customize it any way you like! I want to mention also, that I’m in the Dallyne Summer House, also from Raindale! It’s available at the current round of Cosmopolitan and is such a pretty little building! Now, I have to get back to unpacking all these books!

As for all the other things around me, I’ll start with the 3 pieces of art on the wall! They’re from the Copycat Art gacha set from Nylon Outfitters. They’re from the March ’14 round of The Arcade. The ‘Laugh’ sign is from the ‘Words’ gacha set from M.Law Designs and available at The Chapter Four. The 50’s Side Table, which is under the red radio is from the 50’s Sofa Set from irrie’s Dollhouse. The Speaker Light in bronze is from NOMAD. The crate of books and the stack of books are from the Bookworm’s Hibernation gacha set from [bauwerk]. I love having a coffee or latte while I’m relaxing and this is one of my favourites, it’s from the Coffee House gacha from Standby Inc. The little plate of ‘8 Minutes Mints’ is from the Storytellers Burrow gacha set from 8f8.

I’m relaxing in the Sleepover tank and shorts from Tres Blah. They’re exclusive for the Lara mesh body from Maitreya and fit perfectly. So cute. This gacha wasn’t in the main store last time I checked, but it may be there by now. Hopefully, because I’d love a few more pieces from the gacha.

I love the Bow Slides from [Vale Koer]. I always seem to get the fatpack when purchasing [Vale Koer] items, it just makes it much easier than deciding what colour to get, and plus, the amount of customizing the fatpack has is incredible! These are available at the current round of Collabor88. The Arwen hair from Mina Hair has turned in to one of my favourites. As always, I’m wearing the Alex mesh head from Logo with the Alexa skin in honey tone from Sinful Curves Skins, along with the Lara mesh body from Maitreya and the flat feet from SLink.