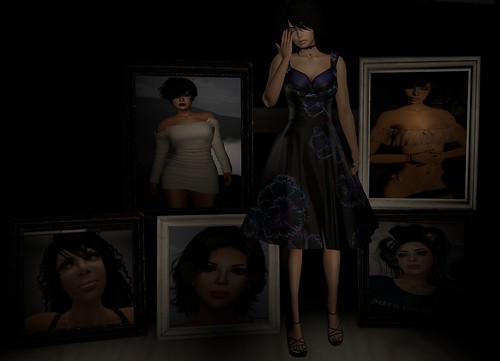 ……as I take a stroll down memory lane! I was doing a little bit of inventory work and I found a treasure trove of memories! If you look at the lower left of this picture, that’s the earliest photo I have of myself. It was taken on March 11, 2012, and I was a NOOB, at just under 2 months old! I was having loads of fun and in the beginning I bunked with my sister at her little home. She gave me my own pose stand and it was there we chatted while I struggled with the virtual world! Thankfully she was a wealth of information and made my Second Life as easy as it could be, for a noob like me! The other two pictures on the bottom row are from April and August of 2015, and the top left shot is October ’15, with my new SLink hands! You should recognize the top right picture since it’s from my previous blog post, not one inch of system skin showing! Oh how far SL has come! I sometimes wonder what it would be like being new at this point with everything mesh! It may be easier to break into SL now, but I think starting out back in 2012 made it a challenge and plus I’ve watched how everything has evolved! While I stand among my old pictures I have to admit that I have a hard time looking at some of them! ‘What was I thinking!! I’ve found that my journey in Second Life and in-world photography is pretty much the same as most everyone, doing what I do! We’re all beginners at one point, so if you’re new to this virtual life, just stay calm and know that it’s a large learning curve, at least it was for me, and everything is in a state of flux, always changing!

The ‘Adventures in Babysitting’ Quest at the Flawless Sim goes until May 29, so there’s still a few days to get in on the fun! Just TP to the Flawless sim, click on the sign to get your free Quest HUD and get started! The HUD will take you to each participating store and once you complete a simple task, you’ll get the free prize from that store! The ‘Electric Garden Dress’ is the free prize from More Than Ever! It’s compatible with the Belleza, Ebody, SLink, Maitreya, and Tonic mesh bodies, and also has the standard fitmesh sizes. So pretty!

I just love what bento hands have brought to poses! I wasn’t really eager to jump on board with them, but now I’m sold! This pose is from the ‘Photo Booth 1 pose pack from [KoKoLoReS], it contains six poses plus their mirrors and all of them tell a story! When looking at old pictures of myself, this one says it all! I usually wear dark hair, so this time it’s managed to get lost in the darkness! It’s the Jin hair, one of my favourites from [KoKoLoReS]!

You can only see the tops, but the Alba Wedges from NX-Nardcotix go nicely with a summery dress! They fit the SLink and Maitreya mid feet and come in eight colours!

One of my very first tattoos was the ‘Little Black Bird’ tattoo from Aitui! Thankfully it’s been updated for mesh bodies, so I can still wear it! It has appliers for Omega compatible bodies, plus the SLink and TMP mesh bodies!

The cute ‘Bow Choker’ in black from Go Figure is a little something I found on Market Place, while doing some online shopping! It’s 100% mesh, RLV, comes with gold and silver studs, it’s completely editable, and so cute!

As usual, I’m wearing the Alex mesh head from Logo with the Luna skin in ‘peche’ tone from Sinful Curves Skins. I added one of the eye shadow colours from the Mag Shadow pack from Veechi, also! The rest of me is the Lara mesh body from Maiteya and the mid feet from SLink.

The frames for the pictures are the ‘Vintage Distressed Frames-monochrome’ from +Half-Deer+.