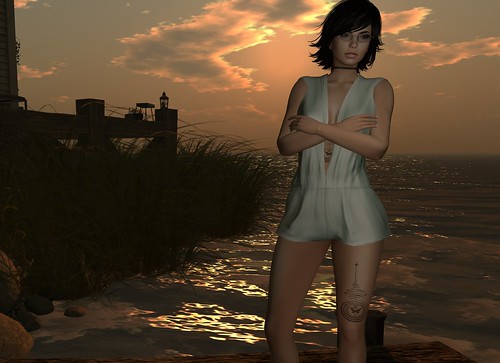 I’m quiet today, which has made it a little more difficult to write anything worth reading! So, I give you, today, a little snippet of lyrics from Chris De Burgh, who I’ve been a huge fan for a lot of years and is well worth a listen, if you’ve not heard of him! You’ll find him singing this song in concert here.

I have to admit that I’ve not been a big fan of rompers! So, with an open mind I tried on the Sally Romper from Stories&Co. by Flowey, and have to say, I like this one! The texturing is soft and subtle with nice lines and a nice selection of colours! It’s fitted for the Maitreya Lara mesh body and each colour comes with a solid and a transparent version. This is the debut ‘Last Friday’ release, so keep a look out for next months release! The gist of this is that every month you’ll be invited to vote on what the next ‘Last Friday’ release will be and then on the last Friday of the month head over to the main store where you’ll find the new release, chosen by popular vote. You can find Stories&Co. by Flowey on Facebook and flickr. The exciting thing, other than having an influence on what Flutter Memel creates, is that for the first 48 hours after release it’s going to be a 30% discount, with VIP members getting an additional 15% off! This is worth marking on your calendar for next month!

I like adding a little bit of ink to an outfit, so when I was wondering what to put with the romper, I remembered I had a group gift in my inventory from Carol G Tattoo Wear. The ‘Unalome’ Leg and Underboob tattoos are both group gifts available at the Carol G main store. The group is 100L to join, but well worth it with regular group gifts being released! It’s compatible with the SLink, Belleza, and Maitreya mesh bodies, as well as anything that’s Omega compatible, which is pretty much everything!!

This pose is from the ‘And So On A’ pose set from Le Poppycock and available at the current round of Men Only Monthly! The May round runs until June 15, then after that the set will be available at the main store.

‘The Countess’ eyeglasses are from Earthstones. They’re very nicely detailed with a generous amount of colours to change, via drop down menu.

The ‘Gaia Star Collar’ is from a gacha set from Kibitz!

The KAZUHA hair is from Argrace.

As per usual, I’m wearing the Alex mesh head from Logo with the Luna skin in ‘peche’ tone from Sinful Curves Skins. I added one of the nine selections from the ‘Blossom Smoke Shadow’ eye shadow pack from Veechi. The rest of me is the Lara mesh body from Maitreya.

I’m at my beautiful home at Winters Wind here, which I’ll add, has a vacancy right now! It’s a beautiful place to call home!

You can’t see much of it here, but I’m standing on ‘The Jetty’ from IMMERSIV! It has a total of 32 poses for him, her and couples(friendship or cuddles).

The grass behind me is the ‘Sword Grass, long’ from KIDD Grass & Garden.