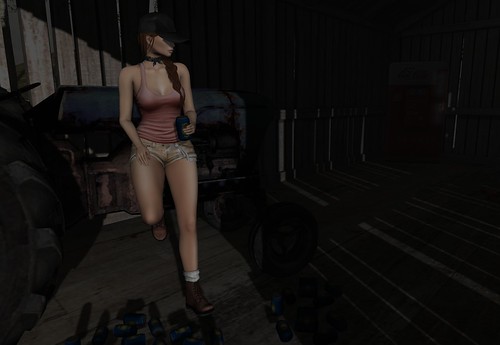 On a hot summer day the best place to be after a long day in the hay field is in the shade! Just crawl into the dark with a huge jug of water, take the hat off, and listen to the silence. I know how this feels since I grew up driving a tractor during haying season. Back in the days before cabs and air conditioning was common on a tractor and being out in the heat of the day was the only way to get the job done! I had the easy job of driving the tractor since it was Dad who was stacking the bales as they came out of the baler. He could throw hay bales from sun up to sun down and still get the cows milked. And he’d get up the next day and we’d do it all again! Those were tough days and I often wonder how he did that, he never had a body builder body, but he was so strong…and he could put in long days. Whenever haying time comes around I always feel melancholy about it. There’s no smell like the fresh cut hay drying in the hot sun, and having the hope of getting finished before rain! The saying, ‘make hay while the sun shines’ is never as true as when on the farm in July!

I want to point out that the huge amount of empty beer cans here is a little shocking! There’s never any alcohol consumed when working on or around heavy machinery here, it’s just wrong!! After the day was done though, Dad could slam back a bottle of beer in 15 seconds flat!! 😀

The ‘Broke Fixer Up Tractor’ was such a surprise to find on Market Place! It’s from ..::TASTY::.. and it’s 100% mesh with materials enabled and only 2 LI. It has 7 animations with props, plus it has broken idling sounds too! And believe me, it’s not running good!

I’m dressed for tractor driving here! I’ve got the Daryl Hair and Cap from Opale and fame femme. This is from the browns hair pack, the cap can be worn or not, with or without patches, and it’s HUD driven with 10 colours!

The ‘Mindy Tank’ from Just BECAUSE is at the new round of ~uber~ and the fatpack is huge with colours and options!

The ‘Carrie Denim Shorts’ are from /erratic/ and the scarf is optional plus the scarf and back pockets are HUD driven with lots of colour options.

The ‘Loretta Bandana Scarf’ is part of a necklace and bandana set from Chain. The bandana is HUD driven with the 3 colours.

I can never resist an opportunity to wear my favourite work boots, the Bossy Boots from fashionably dead. I know they’ve been around a long time, but I think they’ve stood the test of time and still look great. I have the sock add ons with them.

The rest of me is the Lilo bento head from Catwa, with the ‘Luna’ skin in ‘peche’ tone from Avada(formerly Sinful Curves Skins), along with the Lara mesh body from Maitreya.

I’m in the shed at the Honeycomb sim, home of the hive main store, where joining the group gives rezz rights! I love that!

2 thoughts on “A Girl and Her Tractor!”