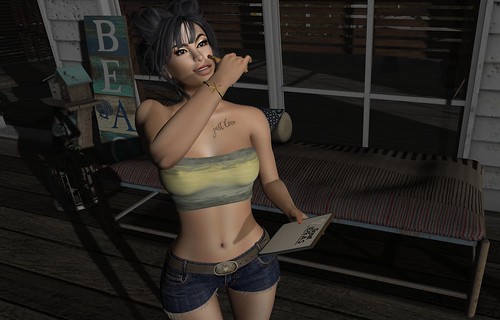 The idea to make a machine that slices a loaf of bread was a great idea. The day I decided to cut off an electrical wire with a pair of pliers, without shutting the breaker off…..not so much. Indoor plumbing was an idea that was pure genius. The time my sister said, ‘Hey, lets crawl up the bale elevator’, wasn’t. One broken leg and much crying ensued, but then, I was only 6. 😀 Whoever had the idea for an automatic washing machine was pretty darn smart. When Dad said to me, ‘Hang on to that board while I sand it’, I should have been smart enough to see this coming and walked away! But instead I got my hand sanded with a belt sander….good idea? Nope…not even close. What I’m getting at here is that there are so many people that have great ideas, and my family and I are more like a Jackass movie!! It’s my own fault, really. I’m sure climbing the bale elevator would have been fun had I been older and a little less clumsy, my sister made it up and back safely….but no, I break my leg while at the bottom. The hand sanding(as we like to call it) was nothing more than me helping Dad out, and since I’m a people pleaser I help when someone needs it! For the record, it only bled for a little while and he laughed.. The live wire and pliers incident I have a harder time explaining, I guess I just wasn’t thinking. A note to anyone who does want to try it, don’t wear a fuzzy sweater when you do, it gets scorch marks down the front! 😀 These are just a few anecdotes that stand out it my thoughts right now, I’m sure everyone has moments like these….. at least I hope so.

The Epiphany opened yesterday, it only comes around four times a year, so it’s always exciting when the doors finally open. I was up bright and early this morning and managed to gain access to it, much to my surprise. There’s all kinds of goodies to play for this round and there’s also some gifts in celebration of The Epiphany’s birthday. Veechi is at this round and has an incredible gacha set of goodies! The ‘Desert Sun ‘ catwa make up gacha is a collection of vibrant desert colours with shadow and lip tint among the commons and one of the RARE items being lashes! I’m so excited to be able to wear all these goodies since my acquisition of the Lilo bento mesh head from Catwa. I’m wearing one of the two options from the Lush Lashes, RARE prize and one of the three options from the Victoria Shadow, naturals set. In all, there’s ten commons and 2 RARE to play for. The Epiphany runs until August 15.

In the world of Group Gifts, !NFINITY has the Emme Summer Top out free for group members and it’s perfect for these hot summer days. It’s compatible with the Maitreya, SLink, Belleza, Tonic, and TMP mesh bodies, and also comes in standard sizes plus, it’s HUD driven including eight colours. The group has a 50L$ one time fee to join, but with regular gifts and reduced pricing on new releases, it’s well worth it!!

There’s still a few days left in the current round of Shiny Shabby and LEGAL INSANITY has the Ella Denim Shorts exclusive to the event. They fit like a glove and look incredible with a slimming leg and a nice round butt. 😀 They’re compatible with the Maitreya, SLink, and Belleza mesh bodies and they come in four denim tones, sold separately or as a fatpack. Shiny Shabby runs until July 20.

The July round of The Chapter Four is still going strong with lots of time left for you to get your shopping done! {MYNX} has the ‘Beach Beads’ gacha set there for your playing enjoyment. These bangles just scream fun and summery and with ten commons and two RARES to play for, you’ll have as much fun as a beer commercial. 😛 I’m wearing the ‘Beach Beads-Starfish, RARE which is colour change via drop down menu with six colours for the cord.

This is how I look before every blog post I write, if you want to know the truth, although I’m not usually smiling. 😀 RC Cluster has the ‘Really Neat Notepad and thinking pencils’ gacha set at The Epiphany and I got the ‘Great Ideas’ version to help stimulate my brain! You get the notepad and the ‘thinking pencil’ in each prize with arm poses included. Just add the two things to yourself after you’re in the pose you want and your arms will do do their thing!

You might want to zoom in a bit in flickr to catch a good look at the pretty manicure I have on. This is from the ‘Grapefruit Mimosa’ applier set from Hello Dave. It’s compatible with SLink, Omega and Maitreya nails. This is one of five colours in the mini set.

I love the ‘Satomi’ hair from [monso]. The hair is shaped into cute little kitty ears and tied loosely at the back. It’s at the Hair Fair 2017 today, but with this being the last day it should move to the [monso] main store shortly.

The ‘Just Love’ tattoo is a group gift from Carol G Tattoo Wear. I like it’s simple message that isn’t thought of enough. There’s five other group gifts available for group members at this time.

I’m using the animations HUD for the Lilo bento mesh head from Catwa here to make this look that kind of looks like I’m happily thinking good things. I will admit that this isn’t the picture I wanted for this post, but after crashing a whole bunch of times while trying to take a different shot, I finally gave up and settled on this one. I just didn’t have the energy to log back in and do it all over again, I’m sure there’s a fellow blogger or two that might feel my pain. 😀 So, to make the Lilo head look fab I’m using the Luna skin in ‘peche’ tone from Avada. I just love this look and find it hard to try others, so Luna it is! And as always, I’m wearing the Lara mesh body from Maitreya.

I’m on the deck of the Boat Shack from REDGRAVE Homes and Interiors.

One thought on “Great Ideas”