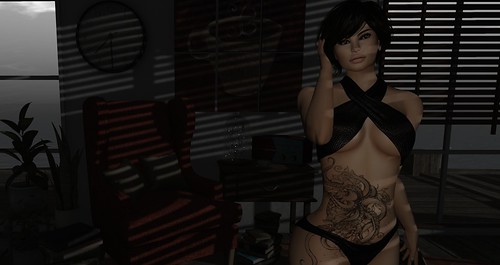 It used to be only a certain type of person got a tattoo! It was the rebels and the bikers then, but it’s become very mainstream now and much more accepted by most people. I know there’s lots of people that frown on them still, but I’m not one of them. I will admit to having a couple of my own in real life. I’ve had them for quite a few years, and thankfully I put them in places where gravity won’t affect them too much. Gravity is a harsh mistress, you know! 😀 I have one on my ankle and one on my shoulder, both fairly small and covered most of the year. I sometimes forget I have them, really. One of my real life neighbours is quite covered in tattoos. I’ve not seen him without a shirt, but he has full sleeves and there’s tattoo peaking out of the neckline of his T shirt so he appears to be covered. So with him looking very much like what you’d think of as a biker or a rebel it was surprising the first time I talked to him. He never swears, he’s super polite, and always calls me dear, in a nice way. He doesn’t have a motorcycle, but he rebuilds old cars and is exceptionally good at it! But you know what I mean, he’s tattooed, he has big bushy hair down past the tops of his shoulders, his beard is a little longer than that and he has tattoos, so you’d think he’s the stereotypical rebel. But no, he’s just a nice guy living his life and would give you the shirt off his back if you needed it. I hope one day someone needs it, I’d like to see how much of him is tattooed!

When I started my Second Life I fell in love pretty much right from the first with virtual tattoos. The quality of them has improved immensely since I was young in this virtual world and with the mesh bodies the detailing can be incredible! I’m so excited to see PIMP MY SHI!T back with new releases for the August round of the Bodyfy event. I’m wearing the Octo Tattoo in medium ink tone, although it comes in colour also and has three ink tones. It’s Omega and TMP compatible and can be worn on all layers. So happy to see PMS back in action!! Bodyfy runs until August 30.

The pose I’m using here is one of the five in the ‘Suri’ set of poses from Imitaion. I’ve always loved SL poses and Imitation is one of my favourite pose stores. The sets are all bento enabled and they’re so expressive and alive. I really think Bento hands have changed the way bloggers and photographers can create photos that really show emotion and bring their scenes to life. You can also find Imitation on Market Place.

The Chapter Four has always been one of my favourite SL events, and I’m so lucky to be able to feature all the incredible work by the designers who participate. I’m featuring some of the gacha items from the ‘Dark Oak’ gacha set from Bee Designs. The Arm Chair, Side Table, and the Poster are all part of the set which has eight common and two RARE to play for. The Chapter Four runs until the end of the month.

The rest of the items that make my home cozy are the ‘Filmore Factory Clock’ from 7 Emporium, the ‘Star Globe,RARE’ lamp from the ‘Vintage Lighting’ gacha set from ::Static:: and available at The Gacha Garden. The ‘Majestic Radio’ is from the ‘Vintage Radio’ gacha set from KraftWork. Each radio in the set has two versions, one scripted for use as a radio and one for decor only. The house plants on the left are from {what next}. The ‘Reading Pile’ of books is from a gacha set from Apple Fall and the books beside the chair are from [zerkalo].

And as for me? I’m wearing the ‘Candice’ set from [Azuchi]. It includes the panties and top, it comes in ten colours and is available at the current round of ~uber~. I’m wearing the ‘Luna’ skin in ‘peche’ tone from Avada on the ‘Lilo’ bento mesh head from Catwa along with the ‘Lara’ mesh body(including bento hands) from Maitreya. I’ve added a little bit of ‘Smoky Eyeshadow’ from Izzie’s to the look. My eyes are from the ‘Nissa Eyes’ pack from Zombie Suicide and the WAKANA hair is from Argrace.

One thought on “Tattoo You”