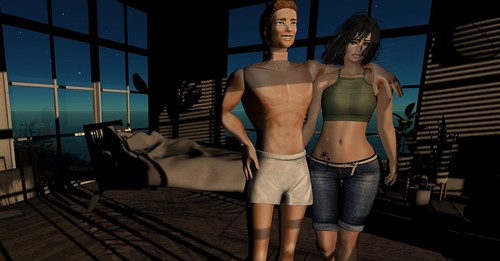 Hi there…I’d like you to meet my new boyfriend, Kenny! He’s perfect for me, he doesn’t say much, he’s not critical of me in any way, and I can deflate him at any time and shove him under the couch! The bad part about Kenny is that he doesn’t help pay the rent, he’s not very attractive, and he has the personality of a beach ball. I’m going to be keeping him around, though. Since I don’t have any Second Life men in my life, Kenny is going to be my model for any couples poses I may be inspired by. It’s not easy being a blogger with no man available to help out with couples poses, and there’s times that the pose makers I blog for have really nice poses that I’d like to use. A couples pose just isn’t the same without two people! It’s not like I want to do poses with explicit sex, just friendly or intimate poses that inspire me. So, I’ll just throw out an idea here, if any of the guys want to take Kenny’s place at some point and help me out with a couples pose, I’d love to chat about it. I don’t think Kenny is going to be very good at showing any emotion, but beggars can’t be choosers! 😀

First off, {MYNX} has a new release in the main store, the Bermuda Shorts come in six colours and are fitted for the SLink, Maitreya(seen here), and Belleza mesh bodies. These fit perfectly and the nicely textured denim is perfect for late summer fun! So kick off those sandals and let the water cool your feet.

The inaugural round of PocketGacha started yesterday and I will admit that the stress free gacha fair is a huge hit! I could relax at home while playing the gachas of some of my favourite stores. Vale Koer has the ‘Preppy Set’ exclusive to PocketGacha and although I wanted the RARE sneakers haven’t managed to get them yet! I did get the ‘Preppy Top, RARE’ though! You can find out more about PocketGacha here. If you’re a member of the Vale Koer group, you received the PocketGacha HUD through the group notices.

The ‘Ruda’ hair from [monso] is one of my favourites!

The ‘Palm Tree Mini Tattoo’ is from IGOTIT and available at Knot&co.. Cute!

As usual I’m wearing the ‘Luna’ skin in ‘peche’ tone from Avada on the ‘Lilo’ mesh head from Catwa, along with the ‘Lara’ mesh body from Maitreya.

I’m using a pose from the ‘Fruit Juice’ pose sets from Le Poppycock and available at The Chapter Four, which runs until the end of the month.

And Kenny? Oh…poor poor Kenny! With the stupid grin he’s wearing you’d think I’m grabbing his butt, but really I’m not! ‘Kenny’ is one of the ‘Plastic Boyfriends’ from Cureless and available at Collabor88.

Behind us is the ‘Mid Century Bed’ from Dutchie and some house plants from {what next}, along with the ‘Filmore Factory Clock’ from 7 Emporium, on the far right of the picture.