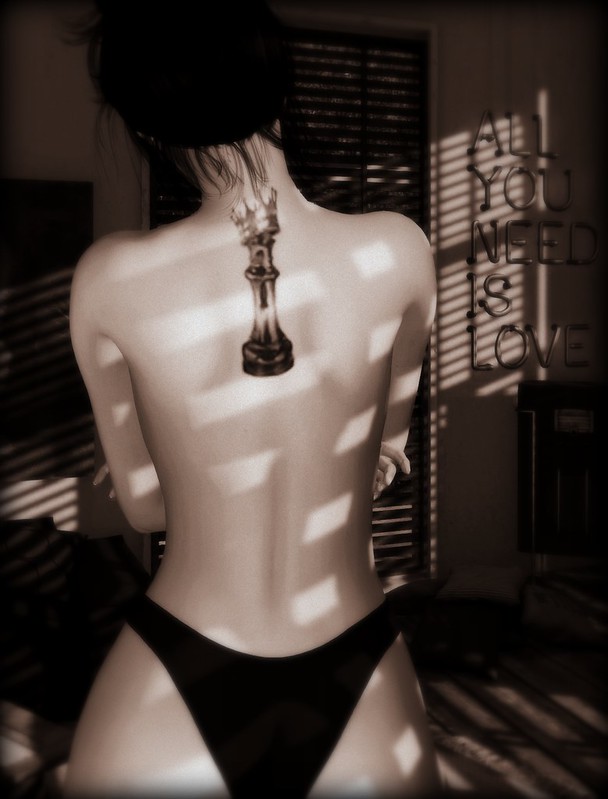 When I thought about starting a blog I really had no idea what I was doing. I had been writing little blurbs on flickr to go along with my very early, and less than stellar pictures, but I really had no clue what a blog would involve. I was a noob, what can I say, but the good thing about that is, we all were at one point. There is no one on this planet who didn’t start something as a beginner. In all honesty I can say that I can’t look at my past pictures, and there are times that I’d love to delete them and just have my newer pictures on flickr. But, there’s no way I’m doing that because all of my pictures on flickr are a visual diary of my Second Life. It may be a little rough around the edges, but like my past in real life, it can’t be denied and it’s something to be proud of, seeing the changes and hopefully getting better. I hope 5 years from now I can look back at pictures I do today and not want to look at them, it means I’ve gotten better, and there’s always room for improvement, for anyone. What I was going to write about is the name of the blog! The song, ‘Beautiful Mess‘ by Diamond Rio came on the radio one day when I was considering a blog and once I heard the line, ‘what a beautiful mess’ I knew that was IT! I do admit I’ve gone through many phases of music tastes and country has been in the rotation at times. On a side note, I have to say I’m not a fan of what today’s country music has become. There are some artists I like, but the early 90’s country was some of the best in my opinion. So anyway, that’s where the name of the blog came from, I added the exclamation mark to it, because I’m totally infatuated with them! Seriously…..I know I over use them…but I can’t seem to stop! Please…someone……I think I need help giving them up. 😀

It’s all about the ink today! I know I’ve mentioned my love for virtual tattoos in the past, but I’ll say it again. I just love tattoos in Second Life, so many great artists, and one of the best in my opinion is Sandowl Violet of Wild Roots, which used to be Pimp My Sh!t, for anyone who’s been out of touch these last months. She’s so creative and her artwork has such fantastic detail, oh…and she’s a fellow Canadian, HI5! 😀 This is the ‘Queen’ version from the ‘Chess Pieces’ matching couples tattoos. There’s a ‘king’ version included too, so you can take your pick. It’s compatible with the major mesh bodies, including Omega and also TMP mesh bodies and the classic avatars that are still out there. Pimp My Sh!t releases are still available on the upper floor of the main store.

I’m wearing the ‘Tinker’ panties from Blueberry here! One thing for sure is they know how to make sexy panties!

One of my favourite hairs from NO.MATCH is NO.SHELTER. It’s a classic!

This is completely edited, but I’ll mention I’m wearing the ‘Raine’ skin in ‘miel’ tone from Avada on the ‘Lilo’ bento head from Catwa and the ‘Lara’ mesh body from Maitreya.

The pose is ‘Out of Patience’ from Del May.