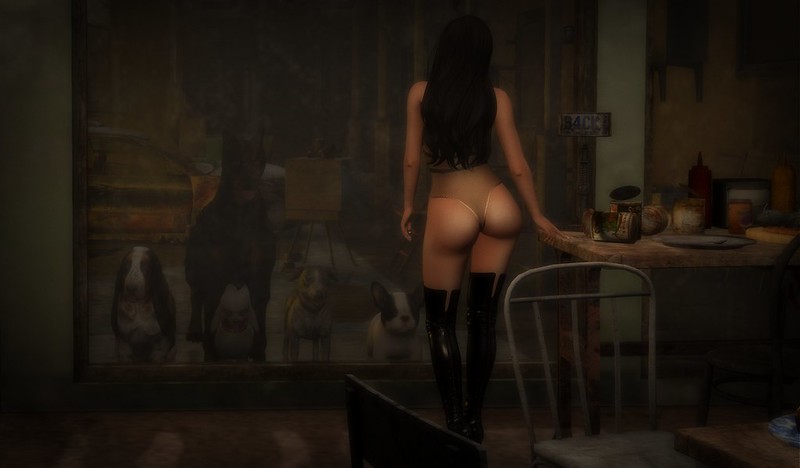 I love Layne Staley and Chris Cornell’s voices together, so powerful.

So, I’ve been looking at this picture for awhile now, and I’ve been hesitant to use it. I even went to Mother Road to take more pictures of this outfit because of my indecision on using this one. The issue I’m having is that it’s another shot of my butt a la Liz Winterstorm! I don’t want to have all my pictures look the same or have anyone get sick of seeing this side of me. It’s just that whenever I’m planning on featuring LEGAL INSANITY they make everything to really showcase the rear view! So, please blame Datrip Blackbart, the creator for LEGAL INSANITY, it’s because of him you have to see my a** so much! 😛 I’ll try to find a different angle for my next picture……but no promises!

So, I’ll tell you about the ‘Luna Bodysuit’ that I’m wearing here! This round of Frou Frou is just about over, so you only have a couple more days to get this there. After that you can look for it at the LEGAL INSANITY main store. It’s exclusively for the ‘Lara’ mesh body from Maitreya and comes in 6 colours. The fatpack includes 3 exclusive metal colours, I’m wearing the bronze here! I want to add that the front of it has cute little patches over the nipple area with neat saying and designs. You can’t see it here, but mine are saying ‘NOPE’! 😀 The fatpack also offers 3 areas to customize. Frou Frou runs until March 8.

The ‘KALISKA’ boots from **Utopia@Design** have become my favourite thigh highs! They fit the SLink, Belleza, and Maitreya mesh bodies and have tons of options. And the texturing is simply stunning!

I’m wearing a long hair here, which rarely happens, but I was told I need to change it up a bit….so here it is! It’s the ‘Ginerva’ hair from Truth Hair and it was the November VIP group gift.

The rest of my look is the ‘Raine’ skin in ‘miel’ tone from Avada on the ‘Lilo’ bento head from Catwa and the ‘Lara’ mesh body from Maitreya.

I’m using a pose from the ‘Detached’ set of poses from FOXCITY.

And for this picture I’m at the diner at Tralala’s Diner! I was warned several times to ‘DON’T EAT THE MEAT HERE’,’COVER YOUR EYES’, and to ‘TAKE SHELTER’! I didn’t eat the meat there, because it just didn’t look safe, and I didn’t get my eyes covered, but I’m in a bit of shelter, at least until those dogs decide to come in here and get me!