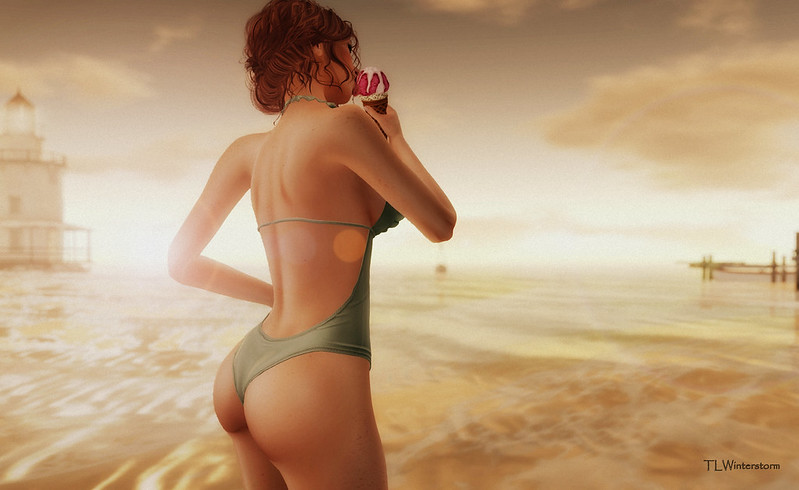 This just in……..someone was snapping pictures while Liz Winterstorm was on a break from her long day with photographers at the beach last week. It seems she reached the limit of her patience when one of the photographers asked something of her that she wasn’t willing to do. There’s no word at this time of what that might have been, but she stormed off the set and was seen snatching this ice cream cone from a 5 year old child, while in a fit of rage! The Mother of the child chased after her, but she refused to give it back and then proceeded into the water, not looking back. It’s believed that Liz has become hard to manage when working and an unknown source says everyone around her is fed up with her. “She used to be so nice and now no one can say anything to her without her yelling and screaming and threatening to quit!” says an insider. This isn’t the first incident with ice cream that Liz has been involved in, last month she was seen buying a 4 liter pail of her favourite flavour, Chocolate Chip Cookie Dough, and when she saw someone with a camera she yelled epithets at them while running after them and swinging the frozen pail of ice cream like a weapon. Only time will tell how she manages, if or when she reaches the breaking point, everyone just hopes there’s enough ice cream within reach for her to calm down, while her staff calls the doctors.

Ok, none of this is true..you do know that, don’t you? I came by this ice cream cone completely on the up and up and no 5 year old was deprived of the treat. The ‘Ice Cream Party’ gacha set is part of the June round of PocketGACHA from Amitie. The set you’re playing for has 7 single commons, and 2 multi person RARE poses, all with props included. I’m using pose 2 from the set and although the ice cream isn’t my favourite flavour…it’s still damn good! PocketGACHA is a monthly HUD based gacha fair that’s super easy, with no endless TP’ing to get into the sim and only to find mega lag and crashing. Just stay home….try the demos……play all the gacha you can handle…and enjoy! 😀

I’m wearing the ‘Kandy Swimsuit’ from *Just BECAUSE* here, I had promised you’d see a rear view last time I wore it and I didn’t want to disappoint. It’s HUD driven with on/off toggles for both top and bottom plus the top has a toggle to make the ruffle the only part covering your girls. It comes in tons of colours, including the printpack and as always the fatpack has every colour you could want. The ‘Kandy Swimsuit’ is available at the JB main store for the FaMESHedGo event, which is ongoing til the end of the month.

As always, I’m wearing the ‘Maddie’ skin in ‘honey’ tone from The Skinnery on the ‘Lilo’ bento head from Catwa and the ‘Lara mesh body from Maitreya.

I’m at Cherishville at Mysteria Cove for this shot.