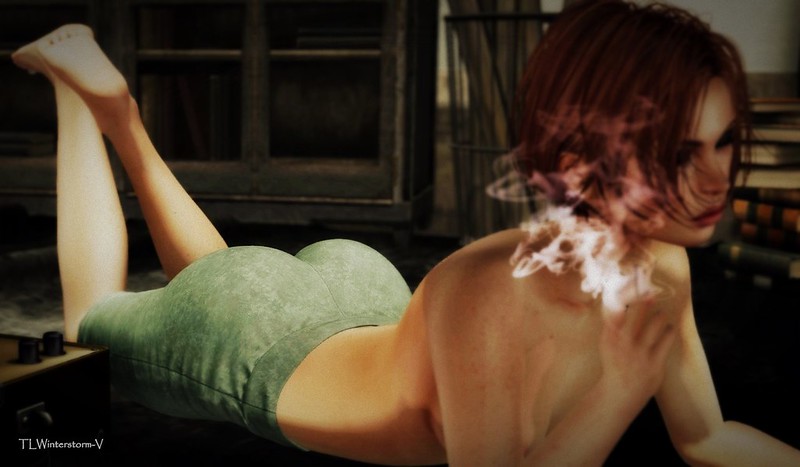 Then a friend said he knew where
Some easy money was
We robbed a man and brother did we fly
But the posse caught up with me
Drug me back to muskogee
Now it’s two long years, waitin’ around to die

‘Waiting Around to Die‘ ~The Be Good Tanyas~

No, I’m not waiting around to die in this picture, I’m holding a cigarette and in deep thought. I can’t say I’m smoking the cigarette because it’s really only an accessory. Thankfully Second Life isn’t scratch-n-sniff because as a non smoker I don’t relish the idea of smokey smelling fingers. But I digress…….back to the thought of waiting around to die…..I think at some points in my life I’ve felt that’s all I was doing and really it’s not a happy place to be, it’s basically a living death. As one gets older, of course this is only what I’ve heard….wink wink……what seemed endless at one point is now a very short time. A line from a song by Van Halen is, ‘my future’s getting shorter and my past is getting longer’, or something like that….and it’s true….but ooh man, it could be depressing if I think about it. So I’ll just push that thought out of my head and think happier thoughts….like how do they put the caramel inside a Caramilk bar! Sorry…….I think only a Canadian would understand that! 😀 Anyway….have a great day, everyone!

*Just BECAUSE* has a new and exclusive release for EQUAL 10, and they’re perfect for the coming warm weather. The ‘Eileen Shorts’ can be dressed up or dressed down, I’m not sure what I did here since I’m not wearing a top…but there’s a very nice top available to go with them if you choose. I guess I’m giving the girls a bit of air today! Anyway, the shorts fit the major mesh bodies and come in 26 colours or the fatpack. EQUAL 10 run until April 5.

As always, my look all starts with the ‘Maddie’ skin in ‘honey’ tone from The Skinnery on the ‘Lilo’ bento head from Catwa and the ‘Lara’ mesh body from Maitreya.

The ‘Pulp Fiction’ pose is from the ‘Movies’ gacha set from Amitie Poses.