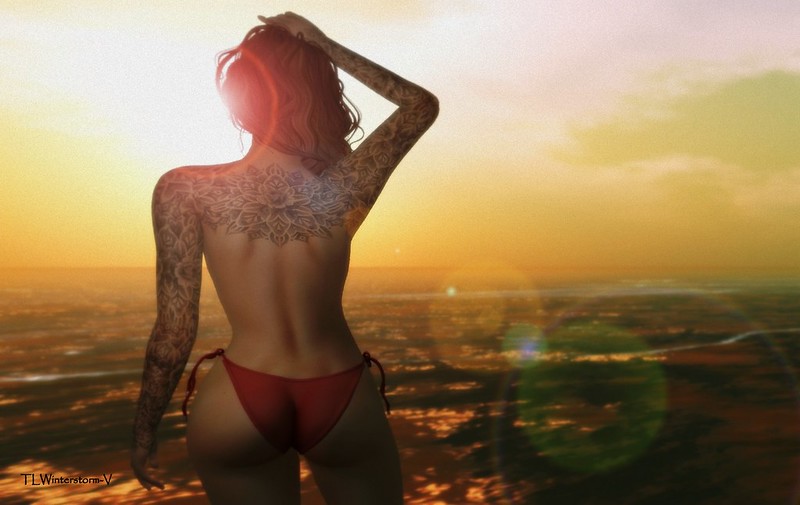 Is my world blue and green? Noooo, it’s blue and brown right now…..and some greys….and maybe a few yellows from dead grasses. But, it’s getting there….it just takes a little longer in my part of the world. And actually, it’s mid April which is still fairly early so green grass and leaves on the trees isn’t really expected. We can still easily get snow this time of year and it’s freezing at nights too, so there’s no rush for summer here. There’s a very fine line dividing spring and fall here in the prairies. When the snow melts the landscape looks much like it did last fall when the snow first covered everything. The grass is still brown and the fields look like they’ve just been harvested, so if I look out the window and don’t feel the spring air, it could just as easily be fall. I’ll enjoy the cooler temperatures of spring today, because tomorrow it could snow….or it could be +30°C and hotter than Hades, so this is just right!

Carol G Tattoo Studio has the ‘Riddle Roses TaTToo’ exclusive to this round of the UniK event. It comes in black(seen here), white, and coloured with 4 ink tones for each and it’s compatible with the major mesh bodies plus anything Omega driven. I love the design that covers chest, arms, and upper back and with it extending down onto the hands it adds a nice look. UniK runs until April 28, and it’ll be available at the Carol G main store after that.

The pose I’m using is part of a group gift from The Owl. The group is free to join and there’s a bunch of group gifts there for the taking.

It’s almost beach time so I couldn’t resist the newest release from Blueberry. The ‘Sunny’ bikini has 2 versions included and tons of colours, plus if you get the mega pack, which is the most economical, you’ll get the unzipped shorts to wear with it.

And as always, the whole start of my look begins with the ‘Maddie’ skin in’honey’ tone on the ‘Lilo’ bento head from Catwa and the ‘Lara’ mesh body from Maitreya.

I’m at the beautifully sunny and sandy Serendipitous Sands for this shot!