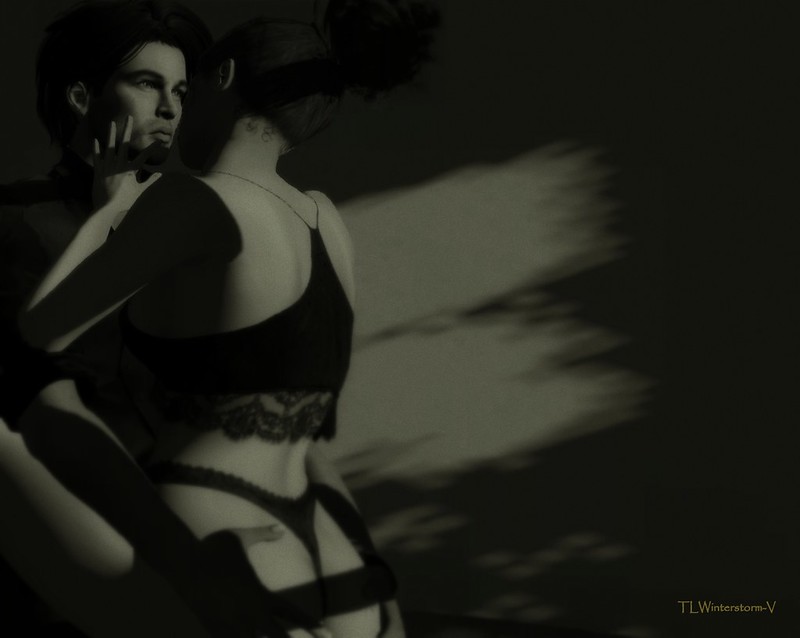 I can’t include the lyrics to this song, mainly because I couldn’t find them anywhere. I probably could’ve written them down as I sang it to myself, with the amount of times I’ve heard it I know it by heart, but if I got it wrong I’d be so embarrassed. I know I’ve gotten many lyrics wrong over the years, so I’ll just play it safe. I found a version by Jack Slade in Second Life on YouTube and does an incredible cover of this song, if you’re ever in-world and want to take in some great live music, I highly recommend one of his shows. I’d say his version is better than the original, but he’d think I’m just blowing smoke up his a**, so I’ll keep my thoughts to myself.:D So, about this song…….I love it…….I know it’s written from a man’s point of view, but I never care about that….it’s the thought behind it. Because, I’m well aware that Vrir doesn’t have hair falling down, like poetry on his back……I know…….but the words are beautiful.

The pose Vrir and I are doing is ‘My World’ from CKEY Poses, it’s bento with the hand poses perfect for us….just a little bit of adjustment needed to get his hands on my butt properly….but that’s easily done with the copy/mod pose balls. The pose is available now at the Sense Event, which runs until May 8.

The ‘Emma Top & Panties’ are from RICIELLI.

The ‘Ivy’ hair is from Stealthic.

And the rest of my look consists of the ‘Maddie’ skin in ‘honey’ tone from The Skinnery on the ‘Lilo’ bento head from Catwa and the ‘Lara’ mesh body from Maitreya.