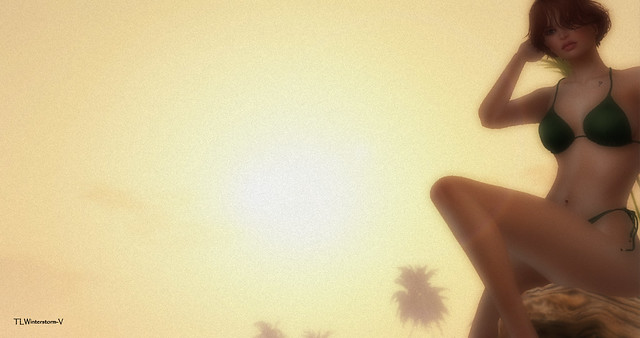 Back beat, the word is on the street
That the fire in your heart is out
I’m sure you’ve heard it all before
But you never really had a doubt
I don’t believe that anybody feels
The way I do about you now

Well, it’s summer here in my little slice of the world, and so far it’s not started out good, if one likes rain, which I do. We’ve had the driest spring on record and with a hot sun beating down all day it’s withering what grass there is…..which isn’t much. In some places the grass is so dry it crunches when walked on like it’s corn flakes! But, there’s not a damn thing I can do about it, other than water what I can to help it survive and keep hoping we get rain. Who knows…in a month I might be wishing the rain would stop……..you know how it is…..if you don’t like the weather just wait a few minutes…it’s bound to change!

A new round of The Liaison Collaborative has started and Le Poppycock has released the ‘Shipwrecked’ pose/prop gacha set exclusive to it. This is more proof that Le Poppycock is one of the finest pose makers in SL. The set contains 15 pose/props which are added to your avatar to use, no worrying about rezzing anything anywhere. The poses are perfect for watching the sunsets at the beach or just enjoying some quiet time. I ended up not showing much of the driftwood that I’m sitting on, but it can fit into any beach setting easily. The Liaison Collaborative runs until June 26.

My look all starts with the ‘Maddie’ skin in ‘honey’ tone from The Skinnery on the ‘Lilo’ bento head from Catwa and the ‘Lara’ mesh body from Maitreya.

I’m at Serendipitous Sands for this picture, although there’s not much showing other than the sky! 😀