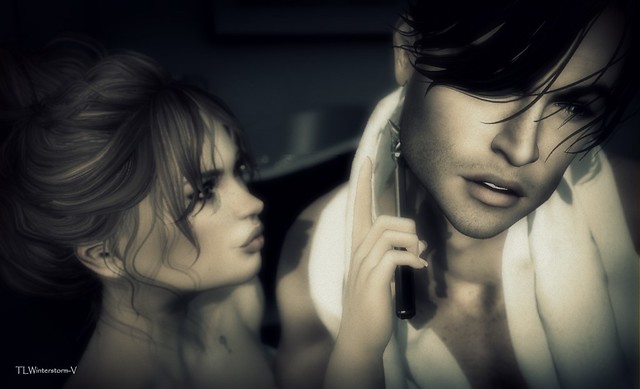 She would wait for you
Idolise, adore you
Love and reassure you
You couldn’t let it be

Now your grandson, blonde-haired blue-eyed handsome
Calls you up from London and sits and asks you why
So your answer: “Don’t be scared of failure
The only failure is never to try.”

And where were you when her hour of need had come?
Now you curse yourself for things you never done

Other than the title of this song, there’s nothing at all that relates to my life, my mood or the picture. What is it I’ve never done you ask? Well, I’ll tell you……….I’ve never shaved a man…..anywhere! 😛 I mean it’s not like a razor is completely foreign to me, I’ve always managed to keep myself shaven and shorn properly but, I think it would be a completely different thing to shave someone else….just the simple act of holding the razor would feel foreign to me, and it did…in the virtual world. Really………Vrir gave me my very own razor to attach to myself…..and I did……..I had to do some editing to it……..and more editing……then saying to him, ‘I can’t make it look natural’. It’s at that point I see another razor in front of me…..and he says, ‘Let me edit the razor’……and I did. I took mine off and let him put the razor in my hand and in approximately 11 seconds he had it properly fitting in my hand and not looking like I was going to turn this picture into a slasher flick! It’s quite an intimate thing, I was a little concerned I’d hurt him…..and I think he was too…..but it turned out well……he only needed 3 pieces of kleenex to stick on to stop the bleeding.

The pose is by ACT5 Poses.

You can see Vrir’s version of this here.