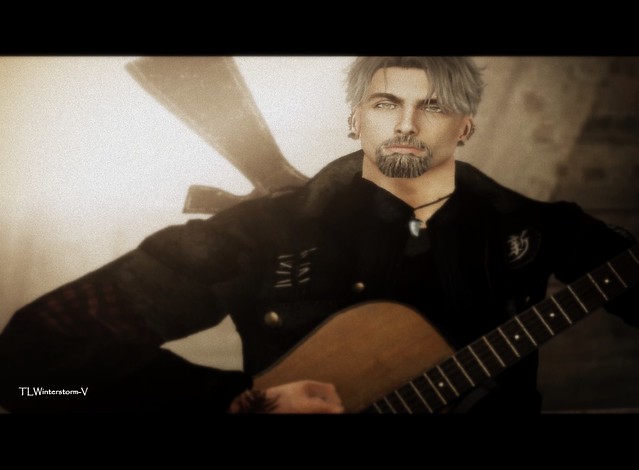 One time, friends, I had a ma
I even had a pa
Well he beat her with a belt once ’cause she cried
She told him to take care of me
Headed down to Tennessee
Well it’s easier than just a-waitin’ around to die

Well I came of age and I found a girl in a Tuscaloosa bar
She cleaned me out and hit in on the sly
I tried to hide the pain, I bought some wine and hopped a train
Well it’s easier than just waitin’ around to die

A friend said he knew
Where some easy money was
We robbed a man, and brother did we fly
The posse caught up with me
And drug me back to Muskogee
Two long years waitin’ around to die

This is a picture of my very good friend, Jack Slade….taken at one of his recent shows in the Bunker. I really struggled with picking a song for this picture, mainly because he himself is a songwriter…..and a very good one……and don’t let him tell you different! I couldn’t choose one of his own……..although I have used his songs in the past, that didn’t seem right…..then of all the songs I think suit him best…..well, he covers most of them already….and I didn’t want that. But, when I listened to this song……and read the words, I thought it was as close as I could come to being ‘right’ for Jack. I think he’ll understand why I chose this one. The picture itself was taken while his guitar playing AO was on…..and since I’d forgotten about being able to slo-mo the avatar, getting a half decent shot wasn’t easy……and Miss Lou was the one who told me about that Firestorm feature……I really gotta remember that. If you’re interesting in checking Jack out, you can keep track of what he’s up to on his Facebook page, his show is an enjoyable hour of his heartfelt and soulful original songs and covers. Oh…and if you drop in and see a chair with a reserved sign? Don’t you dare sit in it……that’s mine……and mine alone…..thank you, Miss Lou. Oh……..and don’t let the fact that he has a gun strapped to his back……….it’s just a precaution in these troubled times…….I have to admit that I was a little uncomfortable with it at first……as a Canadian and our aversion to guns, you know. 😛