Weird, isn’t it? I have a couple Facebook accounts I scan through everyday, just to see what’s new and happening. I’m not addicted, not even close. But I like to scroll through my Second Life Facebook account to see what some of my favourite bloggers are doing and what the designers I follow are up to. It’s a wealth of information for Second Life, really. Personally, not so much. I saw that my Aunt shared a post about a lost dog in her area, my accountant is now on holidays, and a friend likes a cinnamon bun recipe! I don’t have very interesting friends in my real life! 😦 But on my SL account, it’s a whole other world, it’s opened up new ways of thinking for me, I see things that I never want to see again and can’t get out of my head. I’ve followed some pages that have the need to share articles that will ‘shock’, ‘amaze’, and ‘astound’ you. You know the saying, ‘you can’t unring a bell’, it’s true in the world of Facebook. As I scrolled down this morning I saw Justin Beiber throwing up on stage, I didn’t want or need to see that. I saw someone picking blackheads while asking the question, do you like it! 😮 And at this point, I have to admit that I’m now tired of reading all the quotes, blurbs, statements, and poems about how strong I am, how much of a woman I am, and how I don’t need any man. I sometimes wonder what we have become as a society, then I look at Facebook and just shake my head.

Today I’m looking rather minimalistic, and dapper I might add! It all starts with the incredible ‘Kalon’ hair from [BAD HAIR DAY]. I’m totally taken with the colour options available with it having two layers to independently colour. I’m usually not a fan of hair that’s not a natural colour, but these textures are some of my all time favourite colours. I opted for the Black & White pack here, but I’m now thinking I should have splurged on the fatpack. {BAD HAIR DAY] has only men’s hair at this time, but since I’d much rather wear unisex or men’s hair, I’m completely in my element here!

The August round of The Chapter Four is in full swing and this time I’m featuring the Jen Set from ~Nerido~. It’s available in the Gacha room and there’s five colours and three parts(skirt, top, and jacket) to play for. I’ve gone all black but the colours are all perfect for mixing and matching. It’s exclusive for the Lara mesh body from Maitreya.

Also at The Chapter Four is the Helotry Collar from Venge. It’s in the Under 100L room, so you know it’s a steal! It’s HUD driven with seven colours and two metals to select from.

I’ve added the ‘Little Black Bird’ tattoo from Aitui. It’s been around awhile, I used to wear it as a system layer, but it’s updated for Omega, TMP and the SLink mesh bodies.

I’m wearing the ‘Luna’ skin in ‘peche’ tone from Avada on the ‘Lilo’ bento mesh head from Catwa and the Lara mesh body from Maitreya.

The pose I’m using is from the ‘New Bond Girl’ set of poses from TUTY’s. It was at the July round of eBento, so it should be in the main store soon. 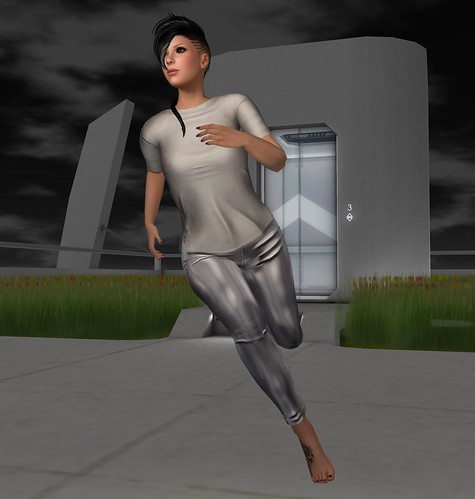 I’m hoofin’ it somewhere and it looks like there’s no time to spare! So, what am I running from, you may ask? Well, I know what I run from in real life! Here’s a list of some of the things I’d run from here on planet earth!

* an alien! You may chuckle at that, but I’ve heard enough stories, and some from right here where I live, about strange encounters with lights and orbs! So if I see something “not of this world”, I’m outa there!

* an angry cow! I’ve actually had to run from a couple, and it’s scary! You got this 1500 lb animal breathing down your neck, and she’s angry, enough said!

* a drunk person! Who can trust that a drunk person isn’t going to lose their lunch all over the place at any time? No thank you!!

* a sprinkler! You know…..when the sprinkler’s acting up and it takes off spraying in all the wrong directions! It’s not like it’s going to hurt…but there’s just something that makes me need to get out of there!

* a mouse! I’m a farm girl, so I’m used to all kinds of wildlife, but a mouse running hither and yon freaks me out! I think I even scream, “EEK!”

I’m striking an action pose wearing the High Shine Leggings and Signature Tee, both from Stories & Co. by Flowey! These two items are available at the current round of Collabor88, and if you know some kind of magic password, you may be able to get into it, cuz as of right now it’s still really busy! The leggings come ten colours, either metals or holographic, and have four sizes and SLink compatibility, and the Tee comes in six colours and four sizes and also SLink compatible.

I’m always taken with hair styles that have an emo type feel with angles and eye coverage, so when I saw Luan at [RUNAWAY HAIR], it was a must have!

I’ve added the Momentum Etched hair base from Aitui for something a little different! This is the female version!

The Olivia skin in Tan tone from .::WoW Skins::. is an exclusive to the current round of Designer Circle!

This action pose is pre installed on the new and updated LumiPro HUD and is made by Nantra!

Hands and Feet by SLink.

I’ve been renting a great sky tower, way up in the clouds, at Temporia Prime and in my explorations ended up on the top floor of the Refinery! 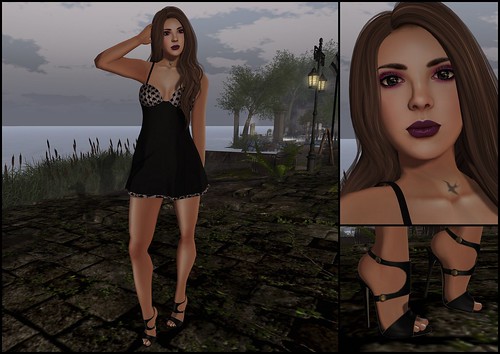 Alice in Sexyland is on and I want you to have a look at a couple things you can get there! The Babydoll Dress from even.flow is an exclusive at the event and it’s a cutie! It comes in five standard sizes, a fitted mesh version, and is also compatible with SLink Visage. They come in packs of two, one solid colour and one patterned version. I had a hard tome choosing one to show you, they’re all great!

Also at Alice in Sexyland is the Adore, Madder skin from Lumae! The one I’m wearing is the peach tone, but all tones are there and all on sale 50% off for the duration of the event, which runs until June 26. The pack includes all the appliers you could need…and then some! 🙂

Designer Circle Round 107 is on until June 20 so there’s still time to grab all the deals! The Venice Sandals in Black from *StormCrow Design’s* are a nice feminine design that could go with just about anything!

I was hair shopping earlier today on Market Place and came across the Summertime Sadness Mini Medley from Alice Project. It comes in four sizes for all the different busts out there and it’s HUD drven with a nice little selection of colours. Oh….did I mention it’s FREE!

The Little Black Bird tattoo is from Aitui. 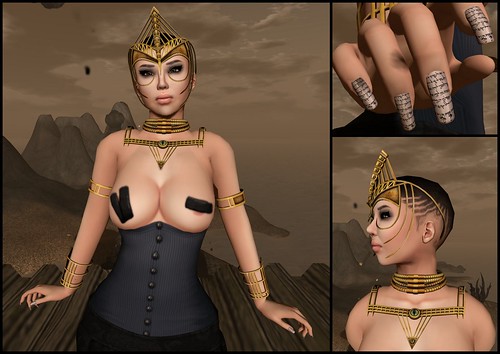 Life is funny, whether it’s your first or second! It’s when they collide that funny things go through my brain. Like RL shopping…..I see nice shoes and think to myself, “I have a pair like that,” then realize that the pair I have are in SL. They won’t fit my real size nine foot! Getting my lives confused might be something only I do…but I hope not! Otherwise I’m kinda weird….oh wait…yea…I think I am kinda weird! 🙂

I’m featuring a couple different designers in this post! I chose a different shape for just a little bit different look! I chose Isobel from L’Nyn Body Shapes. She’s nice and curvy with a little wider hip and such a pretty face!

I’ve donned the complete set of the Nephthys gacha set from MeshedUp and available at The Fantasy Gacha. The Headdress is UltraRare, the chest plate is Rare and the collar, armlet and braclet are the commons! They come in three different tones, Gold(seen here), Ocean and Rose, all are gorgeous!

The Jewel,bare skin in Satin tone with the dark brow option is from Lumae.

The eyeshadow is from the Grunge pack from The {Wicked} Peach and available at the Cosmetic Fair.

The incredible SLink nail applier is from the Sonnet VIP gift pack from Hello Dave.

The Etched Hair base tattoo is from Aitui.

The Wanderer Ribbed Corset, in slate, is from SN@TCH.

The pose is from the Look at Me pack from Nani Poses.

I took the pictures at the Spencer Museum of Art. 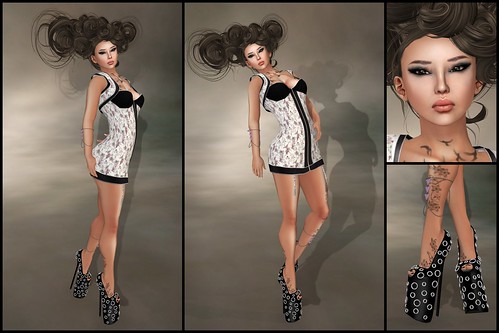 The change is so radical, when I use a different shape, it’s like looking at someone else! It’s like having multiple personalities and having a different name and identity! I’m sure my voice would even be different! 🙂

I’ve chosen the Nagy shape to show you today, from L’Nyn Body Shapes. She’s a beautiful girl who’s not afraid to be both sweet and sexy!

Melak Fashion knows a little bit about being sweet and sexy too! The Sweet n Sexy outfit has a beautifully sweet texture with a little sexiness thrown in to show all the curves a real woman has! Included in the outfit is the dress, the shoes(for the SLink high feet), and the arm and leg jewels.

The skin is Jewel, bare in Peach tone from Lumae.

I added the Dark Style Eyeshadow, eclipse from KOSH and some eyeliner in black from DeetaleZ.

The chest tattoo is Pretty Birds,flock from Aitui and the leg and feet tattoo is My Dear Fairy from Pervette.