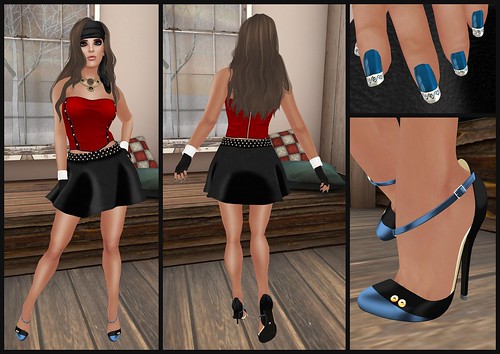 When looking for a title for a post I’ve come to the conclusion that there’s a Bob Dylan song to fit anything! I’m a Bob Dylan fan, I’ll admit it! My family called me crazy when I first started listening to him, but there’s just something about his songs that speak to me!

I’m going to start with one of the blue items I’m tangled up in! It’s the beginning of the weekend and a new round of 60L Weekend sales has started. Dark Horse Style
has two SLink nail applier packs available at this great price for two days. The Scroll Tips pack has six colour options and, like all DHS packs, one HUD does both mani and pedi!

CroM has a couple of promo items on sale right now! The Ruby top in red and the Trya skirt in black are a great little outfit for a great price, so get over there while the deal is on!

The Glitratin shoes from Milk Tea are for the SLink high feet, but by being unrigged they can also be positioned for the TMP Ouch heel. They come in six colours to choose from and have a nice satiny finish that looks great!

The Bear gloves from katatonik are at Collabor88 but only until January 7, with the new round starting on January 8. They have SLink appliers and the tattoo layer for system hands with SLink or standard cuffs to fit either hand option.

The Waves hair is from .Olive.. It is one of six VIP group gifts along with six gifts for anyone! The group is $250L to join. I’m not sure how long the gifts will be out so get over there asap!

The eye make up is red from the Dreamy Goth eye shadow mega pack from ~*Souzou Eien*~. The lip colour is the Contessa option from the Opal pack from MOCK Cosmetics.

The necklace is Boadicea’s necklace, RARE from a previous round of The Fantasy Gacha Fair from The Forge.

The skin is Eliana, bare in Honey from Lumae. 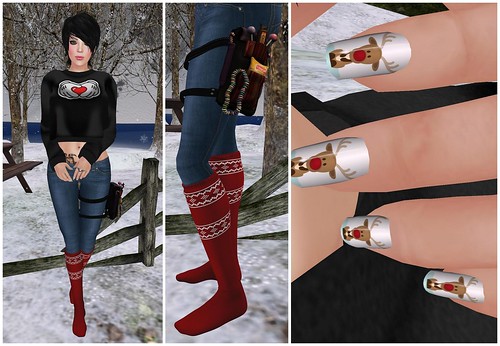 When I’m troubled with the weight of the world, feeling downtrodden and heartbroken. When I need some peace and quiet in this bustling world, the best thing to have is cozy socks!

The one thing I need for this chilly day is a hot chocolate or tea! Shoot! There was a booth there for it, I don’t know why I didn’t get one! Oh well, I’m still feeling at peace and happy on this snowy Sunday. I should have shoes on too, but I wanted to shoe these marvelous socks from DECOY. I finally got in to Collabor88 to have a look and fell in love with the Lumi Socks. They come in lots of colours and each pair has plain or print and 3 sizes! No one should be without a warm pair of socks! The Dana 76 jeans are also from DECOY.

The cute Milo top is a subscriber gift right now from CroM. It’s only for a limited time so get on over there!

The Jolly SLink nail appliers are from DaneMarkZ.
The HUD is stuffed with 10 festive designs that just shout Jolly!

The leg pouch may be from the December 2013 Arcade Gacha Event but it’s fun and festive so I couldn’t resist. This is Crazy Candy from DRD(Death Row Designs).

The adorable skin is Nima, Rosa in Latte from Lumae.

The Heartwings ring, you can see from afar, is available at The Dressing Room Fushion from Swallow.

One of my favourite hair is Boys & Girls 42 from Dura.

The belly tattoo is the “fresh” tone of I Like Turtles from HollyWeird.

I was at The Glade Ice-rink for these shots! Remember to grab some hot chocolate while you’re there for a skate! 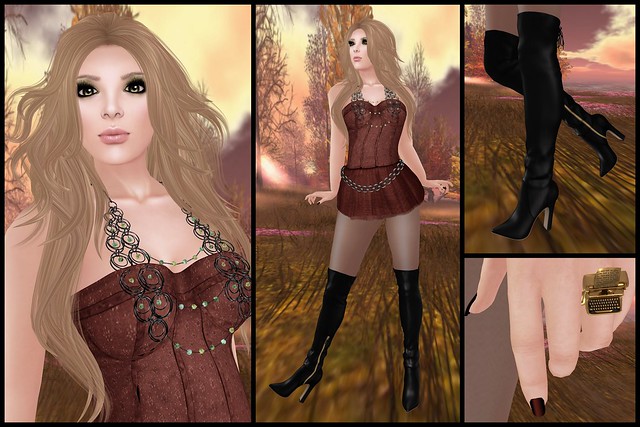 A visit to Truth Hair brought me some gorgeous new locks and a very pretty bustier. I wasn’t sure what to put with it, so I decided that very little would be best! The long flowing Neria hair shows off a lovely face to perfection! The Melody Bustier in rust acccentuates the positive !

A finally got over to the previous round of Collabor88 before it closed, I grabbed the Helsinki Boots Leather in black from Baiastice. They have a unique shape and really show off my legs!

I love this ring! It’s Jack’s Typewriter ring from Yummy. “All work and no play make Jack a dull boy!”

I love the colour of these nails! They are from the Autumn Leaves SLink nail appliers from the Ghee Autumn hunt.

The perfectly flawless skin is Eliana, bare in cream from Lumae.

The larger than life necklace is Sorrrel from Zibska.

The Large Square Link Belly Chain is from POMPOSITY.

The eyes are the Moist eyes in sunflower from Umedama Holic (no longer available).