It’s a cure all for what ails you. Well, not for everything, but for matters of the mind or heart dog hugging is recommended by 8 out of 10 doctors. The other 2 doctors say ‘hug the cat’! I’ve always been one of those people that won’t go to other people for comfort, it’s always been an animal who understands me best. When I had cows, that’s where I went because my life always seemed better when I was with them. They accepted me completely, they were always happy to see me, and they could calm me down like nothing else. Some of you may laugh that my pet of choice has always been a cow, but anything can be a pet, mine were always just a bit bigger than most peoples. I have chickens I could go hug, but I’m not sure they’d be open to that, although I’m sure they’d get used to it if I do it enough. As they are now, they’re happiest just doing their chicken things. So, that leaves me with either the cats or the dog to hug. I like the cats, but none of them are really the hugging type, Hazel likes to just sit on my knee, Bob only likes to be petted, and poor stray Nipper, well…I can’t touch him….yet….but he’s getting much quieter. So….I guess the dog it is! I liked having a large dog for this, I could get on my knees and wrap my arms around them and rest my head on their shoulders, but since I only have my little girl, I have to pick her up and squeeze her tight against me. She doesn’t mind luckily, she’s a snuggly little thing, all 12 lbs of her. I sometimes wonder if people with significant others still have to resort to the dog for hugs, I’d like to think their partner would be the hugger of choice, but I guess there’d be times that the dog isn’t the one a person is fighting with at some point. I think the dog would be my second choice for hugs no matter what, if the dog wasn’t my only choice! 🙂

I’m a little sad today, it’s another cloudy day and life is just kind of a downer right now. But, Second Life always cheers me up….even if it’s just a little bit. I want to bring your attention to the current round of ~uber~, which ends on December 23. I know it’s getting to be near the end of the round, but the ‘Pied-a-Tere’ skybox from KraftWork is there, and it’s well worth dropping in to grab it! It’s an adorable little skybox, perfect for one or two people to live comfortably in one room. I prefer a one room build, myself, it’s a nice open floor plan and with a few privacy screens or even just using rugs, little separate areas can be created. The ‘Pied-a-Tere’ has a LI of 58 and a foot print of 15X15m, and the view outside is a very pretty one. It’s HUD driven with texture change on all the major parts so you can customize and make it your cozy little home. Also from KraftWork is the ‘Easy Like Sunday Morning’ sign, which comes in a blinking and non blinking version.

The majority of the decorating in my little home is from the ‘Stockholm Bedroom‘ from ~BAZAR~. It’s a huge bedroom set including the bed(with lots and lots of adult or PG animations,whichever you prefer), chairs, lights artwork, cabinet, candle bottles, men’s and women’s clothes racks, stacks of books, rug, bicycle decor, night stands, clock, headphones, paper bag, men’s and women’s shoe decor, and typewriter. It really is an incredible set and very reasonably priced.

I’ve added house plants from {what next} and dust bunny.

The ‘old radiator’ is from .junk. but I don’t think it’s available any more.

I’m wearing the ‘Sophia Bustier & Draped Dress from Asteria. The ‘NO.SHELTER hair from NO.MATCH. And as always, the ‘Raine’ skin in ‘miel’ tone from Avada on the ‘Lilo’ bento head from Catwa and the ‘Lara’ mesh body from Maitreya.

I’m in deep thought using the ‘weary’ pose from Del May.

I’ve added a bit of lighting from my much used LumiPro. 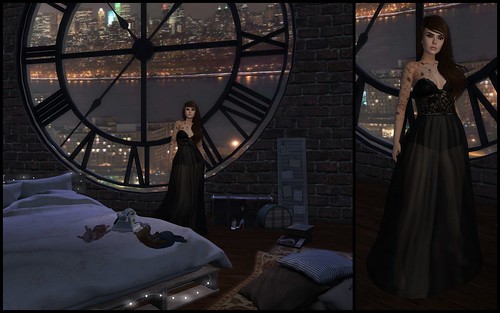 Hot Child In The City by ~Nick Gilder~

I am a country girl through and through….but I’ve spent time in larger cities too, though I’ve always felt a little out of my element! I don’t think I ever stood out as a country hick in the city…hopefully! I’ve been to most major US cities while I was on the road, except one! I never made it into New York City! I kind of regret that now…as I’d love to have seen it, but when I was offered a load of lumber into the inner part of NYC I was a little leery! I had been into inner Chicago with the big truck to make three pick ups and there was low bridges everywhere I turned, it seemed! You’ve probably seen pictures of a truck that’s over 13′ tall trying to get under a bridge that’s only 12′! It’s rather stressful navigating through those kinds of areas! So, I turned down the load to NYC to save myself that stress! One thing that saves me a whole lot of regret, though is knowing that I wouldn’t have seen Times Square or the Empire State Building…I’d have seen some grungy yard full of lumber in a not so favourable part of town! Which is what I mostly saw in all the other major cities I went to! So, NYC is still on my to-do list, but I’m not sure if I’ll ever get there! I haven’t traveled any further than one province over from my home province, in a lot of years! If I do get there though, I want to see a Rangers game in Madison Square Gardens, eat a hotdog on the street from one of the many vendors, and maybe even see where the Twin Towers were. Or maybe I could relive Ferris Bueller’s Day Off, now that would keep me busy!

While I’m on the subject of NYC, take a look at the new skybox from DaD Design! It’s called The Clock Loft skybox and it’s available at the current round of the U L T R A Event! It has a very reasonable land impact and includes an industrial shelf to add to the space. The shelf is copy/mod so you can make a whole bunch of them, if you like! The windows have seven scenes to choose from, all with different areas and lighting of NYC! Love it!

I’m wearing the September group gift(the group is free to join) from #bubbles here and it’s sexy! It’s the Luna Dress which has a lace upper and sheer skirt and it comes in fitted versions for the SLink, TMP, and Maitreya(seen here) mesh bodies and also includes fitmesh sizes! Underneath, I’ve added the High Waist Panties that also has all the same sizing as the dress! The panties are at a super low price!

The poses are from the Modern Condition A & B packs of poses from Le Poppycock! These sets, along with a the Heaven Scent couples pose, are available at the current round of The Chapter Four!

The gorgeous Flowers Tattoo is from Aurica Store! I love the bolero shaped tattoo that isn’t too dark and has lots of pretty flowers!

The Berta hair from Tableau Vivant is available at the current round of Collabor88!

And, as always, I’m wearing the Nelly mesh head from Genesis Labs, the Lara mesh body from Maitreya, and the casual hands and kittne feet from SLink!

As for my surroundings, the bed is the Upcycled Pallet Bed from tarte., which was part of the September Luxe Box. Also from tarte. is the Repurposed Shutter, which is on my right. On the bed is the Ragdoll Cow and Ragdoll Pig, which are from the Ragdoll Animals 2 Collection by !APHORISM!. Also on the bed is the Bric-a-Brac Desk-Phone, RARE from aisling. On my right is the Shoe Clutter, white from Garbaggio, the Greenwich Trunk from Scarlet Creative, and a nice bag, which holds items from O.M.E.N.